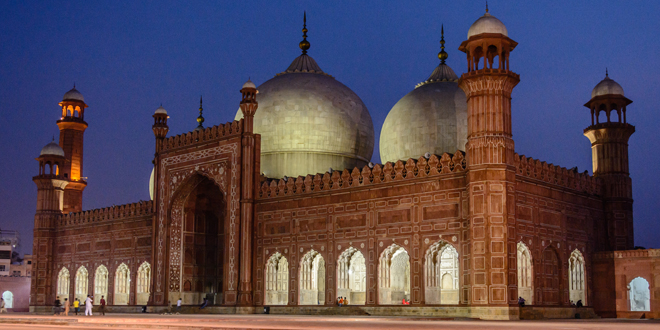 Falling In Love with Lahore

Lahore is a city known for its delicious food, hospitality and liveliness. Being a Lahori myself I could continue composing pages and pages describing the magnificence of this city and its natives but I won’t.

One captivating thing about Lahoris here is their pronunciation of words, or being more specific, their accent. May it be English, Urdu or whatever other dialect, they have a particular Punjabi accent that seems to change every word. Yet, after taking a trip to old Lahore, I am certain you’ll absolutely fall head over heels in love for the city.

Taking a trip to the Badshahi Mosque is a difficult journey. However after coming to the mosque the magnificent structural planning and the excellent view makes you forget the tiresome drive. The mosque is an image of religious grandeur with its red walls raised over the marble domes. There is a grand fountain before the mosque but what strikes one is the internal art work on the walls done in calligraphy.

Apart from the mosque, the region has a ton more to offer. Another extraordinary fascination of the zone is the Sheesh Mahal or the royal residence of mirrors. Said to have been built by the Mughal emperors for their cherished mistresses, the Hall is comprised of mirrors that reflect in daylight adding to its excellence and beauty.

What draws in most to the eye is the delicacy through which the work has been done amid those times which reflects the diligent and hard work done by the specialists to develop the Mosque. Due to unknown reasons only some areas of the Mosque and Fort could be preserved and open for the public yet it is sufficient to give the guest the essence of the Mughalian society and loftiness.

Opposite the mosque, one can see the great Minar e Pakistan carrying significant value for all Pakistanis. Minar e Pakistan is situated in one of the biggest parks of Lahore, called Iqbal Park. Apart from that it is an image of patriotism for all Pakistani’s. Built in the 1960’s on the 23rd of March, our country’s resolution day, this landmark is a unifying symbol of the country as it was constructed by the Muslim League and is considered as a step towards achieving Pakistan.

At one end, you can see the Muslim grandeur during the Mughal time and on the other end you can see the achievements of our forefathers who gave their life to attain freedom for our well being. Apart from that, nearby is also the historic Gurdwara of the Hindus and Sikhs.

The Muslims need to seek special permission to enter the premises however seeing the Sikh area of worship near by the Muslim place of worship tends to show the level of tolerance in this country, breaking all stereotypes.

Delicacies, Cuisines and the Story behind Cuckoo’s Den

After experiencing the cultural and historical transformations over time, the city of Lahore has a lot to offer to all those foodies out there. After a tiring journey of sightseeing of these monuments tourists can visit the nearby food street known popularly as the new food street of Lahore.

What is best about this food street is that it is a blend of divinity and deception. This is because the food street is located in the middle of what once was the Heera Mandi known popularly as the red light area of Lahore and the Badshahi Mosque. Back in the day it was one of the most beneficial areas of Lahore because it would fetch a lot of revenue. Not only did the locals but various foreigners also come by to reap the benefits of the area.

There are various types of foods the food street can offer, from Pakistani snacks such as Paani Puri, Dahi Baray, Samosas to Tikka, Korma and Pulao to Pakistani Desserts such as Kulfi and Firni. What attracts one the most here is the famous inn, called Cuckoo’s Den. It is built in the house of the famous painter called Cuckoo whose origins were from the red light area as well. Having spent his childhood and adolescents at the Heera Mandi he deeply understood how life there was.

This place is not only known for the food but the environment it provides where you can see the Badshahi mosque from one end and the Heera Mandi from the other. The interior designing of the inn also depicts the life of prostitutes enabling one to feel their pain. Upon special request one can also see the gallery of the painter that has not been publicized yet.

Lahore is a must go city. I strongly suggest you all to visit Lahore at least for a week and visit all these places to explore the beauty of ancient times and see how generations back in the years were. It is surely fascinating. My next target it to visit the Shalimar Gardens and famous Wazir Mosque of Lahore, until next time good bye to all.

Valentine’s Day: Love On A Budget

Renew Your Love after Years of Marriage

Are You in Love? 13 Signs That Say Yes