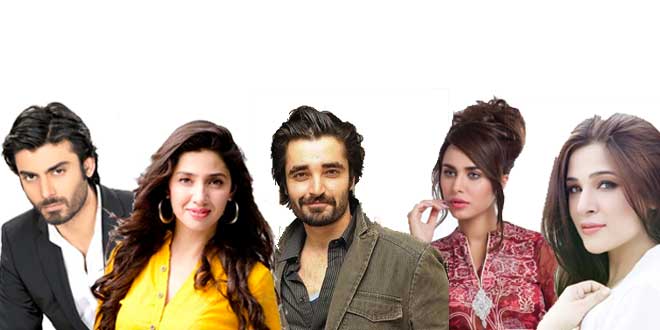 Fawad Afzal Khan is a Pakistani heart throbber. From acting, singing, modeling and producing, there is barely anything that he has left to make it to our rundown of the most sought celebrities.

Fawad started his career as a lead vocalist of a band called Entity Paradigm (EP) which was exceptionally well known for its hard rock melodies such as “Mein Rahoon Ga”. Fawad rose to recognition in the wake of securing a huge part in Shoaib Mansoor’s motion picture, “Khuda Ke Liye” (2007). Soon more doors opened for Fawad as he hit the crest of his career by his commendable performance in the drama serial “Humsafar” that was acknowledged across the country and known for its record evaluations and TRP’s.

This breakthrough incited Fawad to push for excellence further. He performed lead roles in dramas like “Zindagi Gulzar Hai”.  Stating the obvious, Fawad’s fame soon attracted the Bollywood eye and he took a lead role in the film “Khubsurat” alongside the Bollywood diva Sonam Kapoor. He also received a Filmfare Award on his debut Bollywood performance.

Aside from being amazingly attractive and good looking, Fawad’s genuine sentiment and gigantic adoration for his wife Sadaf keeps on melting Pakistani hearts. Fawad has been in the lime light for a long time. He was subjected to different discussions and controversies with the dazzling Mahira Hafeez Khan after their hit Drama Serial “Humsafar”, however Fawad substantiated himself clean and secured himself without any difficulty.

Ayyan Ali is a Pakistani super model and began her career in 2010. She soon came into the lime light when she won the title of the best rising model in 2011. Ayyan has been seen innumerable times pulling off exotic and sensual dresses on award ceremonies, making her the diva that she is. Working with popular brands like Gul Ahmed, HSY and Karma, Ayyan soon got recognition and became the brand ambassador of Ufone.

In 2013 Ayyan became the brand ambassador of Magnum Ice Cream too and having won numerous awards in her modeling career, she now wanted to diversify her talents, therefore she asserted in 2014 that she might represent Pakistan in the Miss Universe Beauty Pageant. She released a song called “You and I” that year which made headlines too.

Another song that gained immense popularity and was seen trending, was ironically named “Making Dollars”.

Tragically 2015 was an intense year for our starry diva as she was arrested by the Airport Security Force in Dubai for money laundering and consequently was culled from the prime of her career for some merited penitentiary time. She is behind the bars nowadays at Adiala Jail.

Sources report that Ayyan and her family have been receiving constant life threats and her life could be in danger even in Jail. Shockingly we have seen a few cruel posts about Ayyan Ali by some known models that were once seen working with Ayyan.

Mahira Hafeez Khan began her career as a VJ on MTV Pakistan, doing shows like “Most Wanted” and “Weekends with Mahira”, she soon found her way into hosting and became popular amongst the masses of Pakistan.

Mahira received offers for modeling amid this time period for acclaimed brands like Pantene. In 2011 Mahira hit a milestone in her career by being one of the leads for the much appreciated film, “Bol”, by Shoaib Mansoor, after which she makes a big appearance in Mehreen Jabbar’s drama series “Neeyat”, from where her acting abilities became well known.

She performs hit after hit like “Humsafar”, “Sher-e-Zaad” and the rundown goes on. Mahira is an impending Bollywood delight as she stars by the king of Bollywood, Shahrukh Khan in a film called Raees.

Mahira was subjected to a few scandals. She was accused for taking a divorce from her husband after her achievement in “Humsafar” and afterward was associated with Fawad Khan for having a discreet relationship. However let’s not pay regard on gossipy tidbits. Mahira today is admired everywhere throughout the nation for her astonishing acting abilities and adored for her beauty and sense of fashion.

Hamza Ali Abbasi is no stranger to controversy, a Pakistani on-screen character best known for his performance in a drama serial “Pyaar-e-Afzal” from where he got recognition on the screen. Hamza soon featured on big screen motion pictures like Main Hoon Shahid Afridi and Bilal Lashari’s Waar.

Hamza has gained a lot of attention because of his political perspectives which has strengthened his fan following. Aside from great looks, Hamza is known to have the capability to keep his fans engaged with some serious gossip.

They say there is no such thing as positive publicity or negative publicity. Hamza has been reprimanded for his remarks on Pakistani female actresses and their item numbers. He has been recently acclaimed as a Hypocrite for performing a sensual scene in his own forthcoming motion picture.

Whatever the case, we adore how Hamza gives us so much to talk about when he is on and off screen. He was seen admiring Jalaibee’s lead actress Zhalay Sarhadi for not showing skin in the movie’s item song and was soon spotted doing a shirtless scene in his upcoming film “Jawani Phir Nahi Aani”. He has been in a scandal or a possible controversy with renowned actress Saba Qamar as well. However, Hamza denounced being in a relationship with Saba and claims that “we are just friends, close friends”.

Ayesha Omar is a multitalented alluring Pakistani artist. She has experimented in almost every field of the industry. From hosting as a VJ to modeling, acting and now even singing, Ayesha has performed for various dramas on popular channels like Hum TV, Geo TV and ARY. She was greatly appreciated for her character of “Khubsoorat” in the hit comedy series “Bulbulay”.

She has also showed off her talents in dramas like “Zindagi Gulzar Hai” and “Dolly Ki Dolli”. Apart from other projects, Ayesha’s sudden weight loss has attracted many and she is soon to be starring in a movie called “Karachi Se Lahore” by Wajahat Rauf’s Showcase Productions.

Modeling and representing various brands like Capri, Kurkure and Zong helped Ayesha establish a solid footing in the industry. She received mixed views from critics about her music but won the Lux Style Award for the best album, disappointing many music lovers but making her fan following stronger.

Ayesha was greatly appreciated for her performance in coke studio season 6. Ayesha is undoubtedly a diva of the industry, especially after her weight loss which has made her exceptionally attractive. She has been spotted at many grand events spreading her magic and love everywhere.