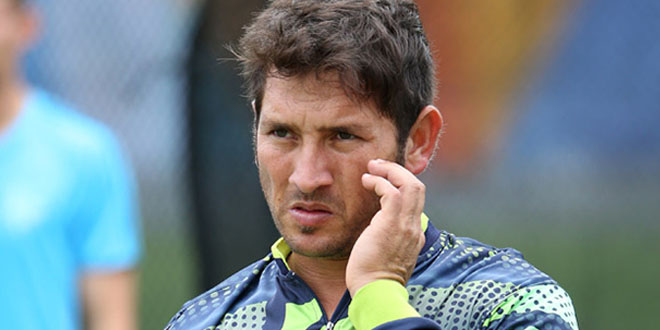 Pakistan will be without injured leg-spinner Yasir Shah as they look for the right combination to win the third day-night international against England in Sharjah on Tuesday, with skipper Azhar Ali admitting his team needs to improve.

“We don’t want to risk him as he is nursing a knee injury so he will not be considered for Tuesday’s game,” Alam told AFP.

Uncapped left-arm spinner Zafar Gohar will fill in for Shah as seeking a sixth bowler in the limited over series, Pakistan have not been able to include opener Ahmed Shehzad in the first two matches.

The series is tied at 1-1 after Pakistan won the first encounter by six wickets while England fought back to level the series with a 95-run win – both matches in Abu Dhabi.

Azhar said Pakistan suffered multiple problems and was forced to use 11 different opening combinations in the last 12 months.

“Ideally, we want to have a set opening pair but unfortunately in the last one year or so we had a lot of injuries plus we had some problems with our allrounders as well,” said Azhar.

“(Mohammad) Hafeez is not allowed to bowl,” said Azhar of the spinning allrounder banned from bowling over illegal action since July this year

“Then we have injury to Imad Wasim,” said Azhar of the newcomer who was ruled out of the four-match series with a hand injury.

“These things create problems in picking the right combination and if there is a weak link in bowling then you can struggle to control the flow of runs and I think that can damage the combination of the team and you have to sacrifice a player to have a better combination,” said Azhar who backed his spinners.

“Yasir bowled well in the first game,” said Azhar of the spinner who took 15 wickets in Pakistan’s preceding 2-0 Test wins but managed 1-108 in two one-day matches.

“You bank on spinners in this part but there was less support for the spinners in Abu Dhabi, the other thing is that some times the other team also hanldes spinners well so there is no issue on their abilities,” said Azhar.

“We are a better team than our rankings suggest but for now we are focused on this series and we will take it series by series and in future like to improve our rankings as well,” he said.