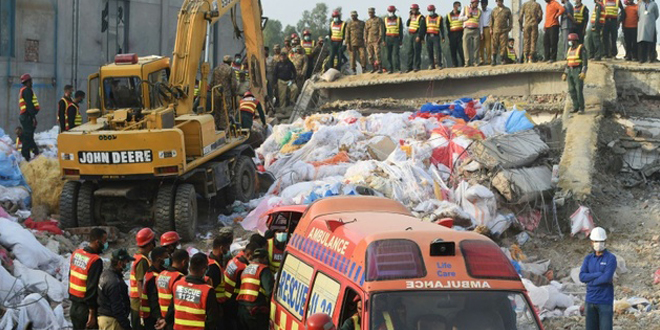 A rescue operation to pull people from the rubble of a collapsed Pakistani factory ended Tuesday after nearly a week, with the death toll at 45 and more than 100 survivors plucked from the debris, officials said.

The four-storey Rajput Polyester polythene bag factory came crashing down on November 4, with officials saying it may have suffered structural damage when a 7.5 magnitude earthquake hit Pakistan and Afghanistan last month.

“The search for bodies or any survivors was concluded this morning and we believe that there is no-one in the remaining debris,” Arshad Zia, chief of rescue services, told AFP.

“The search operation lasted for 131 hours and we did searches from multiple angles repeatedly. The final body count is 45 and more than 100 were pulled alive,” Zia said.

Some 1,000 rescuers from Punjab province, the capital Islamabad and the armed forces took part in the search and rescue, he added.

Muhammad Usman, a top administration official in Lahore, confirmed the conclusion of the search and the final toll.

The accident, which took place near the Punjab provincial capital of Lahore, has underscored poor safety standards in the underdeveloped South Asian country of 200 million.

At least 24 people died last year when a mosque collapsed in the same city, while more than 200 people lost their lives, mostly due to falling roofs, following torrential rain and flooding in 2014.