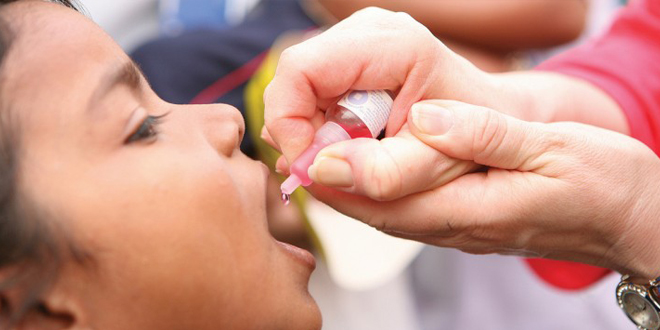 Pakistan may be polio-free by 2016: UNICEF

Having a difference of 85% diminution in recorded polio cases in 2015, Pakistan may be acknowledged as a ’non-endemic country for polio virus’ by next year, a Unicef health official stated on Monday.

Pakistan along with Afghanistan, are the only places where the disabling disease is still widespread. However, this year, only 36 polio cases have been reported in Pakistan, in comparison to last year which was 306 cases. This is a clear sign of progress.

Health experts reflected the year 2014 to be as the’ darkest year’ for the Pakistan polio eradication programme.

UNICEF Team Leader for Polio eradication in Khyber-Pakhtunkhwa and Federally Administered Tribal Areas (Fata) Dr Muhammad Johar said, “Efforts to eradicate the disease have been severely hindered in recent years by militants who attacked immunization teams and polio workers were not allowed in certain areas for administering drops.”

“The progress and achievement in polio eradication efforts has raised the confidence of health teams and Pakistan has set the target of complete obstruction of polio transmission in the country by May 2016,” he said, while adding, “In May 2016, Pakistan may be declared a non-epidemic country for polio virus.”

Aqeel Ahmad, the media liaison officer of the Polio Emergency Operation Center (EOC) Fata, said, “Around 292,000 children from Khyber Agency, North Waziristan and South Waziristan Agencies missed immunization in 2014 due to inaccessibility to these area.”

He observed that in 2015, only 16,000 children were overlooked in the country which is truly praiseworthy.

Ahmad and Dr. Johar both come together in relating this triumph to the military’s determination in refining security, especially after commencing Operation Zarb-e-Azb.

According to Dr. Johar, “The main reason behind the rise in number of polio cases between 2005 and 2014 was inaccessibility to tribal areas where hundreds of thousands of children were missed from immunization, resulting in the breakout of the disease.”