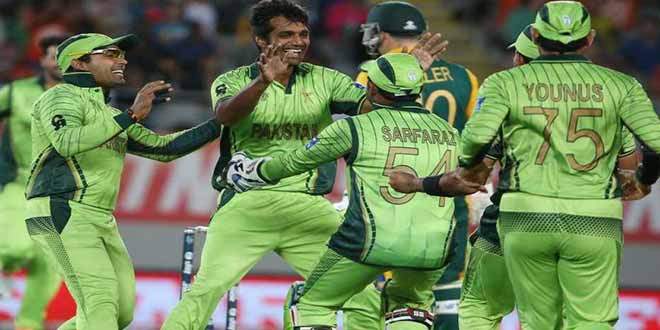 Pakistan faced South Africa in the first of the two matches being played today in the ICC Cricket World Cup. Pakistan was labelled as the underdogs going into this game. In the Pool B, South Africa was placed on the second spot whilst Pakistan on the third place. Pakistan being in top form. Going into this match, their confidence was sky high. With their two consecutive victories, Pakistan had a good set of mind.

South Africa won the toss and elected to bowl first. Pakistan included Sarfraz Ahmed in place of Nasir Jamshed which proved wonders. Sarfraz Ahmed came in with a fresh mind. It was his first appearance in this World Cup. Younus Khan replaced Haris Sohail as experience was required. Pakistan started with a flurry. Sarfraz played some outstanding strokes against a great bowling of the Proteas. Ahmed Shehzad was the first wicket to fall. He scored 18 runs hitting four boundaries. Next to depart for Pakistan was Sarfraz. David Miller ran him out for 49 runs. Younus Khan was caught for 37 runs. Sohaib Maqsood went to the pavilion for 8, Umar Akmal scored 13. Wahab Riaz departed for a duck. Captain Misbah-ul-Haq yet again proved pivotal. He scored 56 runs. Dale Steyn took his wickets. Shahid Afridi hit 2 sixes and one boundary for his 22 runs from 14 balls. Pakistan got all out for 222 runs in 46.4 overs. Dale Steyn the pick of the bowlers. 3 wickets for 30 runs in his 10 overs.

Not a big target to chase, Pakistan looked to get help from their bowlers. Muhammad Irfan, was named in the squad keeping in mind he had that hamstring pull in their last game. Wahab Riaz, Sohail Khan and Rahat Ali completed the pace quadruple for Pakistan. Pakistan started off very well. On the second ball, Muhammad Irfan pace beat Quinton De Kock. He was caught behind for a duck. Hashim Amla and Faf du Plessis scored a partnership of 67 runs. Rahat Ali took the wicket of du Plessis. Whilst Muhammad Irfan took the wicket of the dangerous Hashim Amla. Amla went 100 to the pavilion after scoring 38, whilst Faf du Plessis for 27 runs. Rilee Rossouw departed for 6 runs. He was caught behind by Sarfraz on Wahab Riaz’s ball. Captain AB de Villiers now came in to bat. Knowing about his outstanding batting trait, Pakistani bowlers looked to take his wicket as soon as possible. David Miller’s wicket went to Rahat Ali. Miller got beat by an outstanding yorker and went for a duck. De Villiers started to damage Pakistan. JP Duminy went out next. South Africa’s score was 102 runs with the loss of 6 wickets. Irfan took the wicket of Dale Steyn next. Shortly after Kyle Abbott got out on Rahat Ali’s delivery. Younus Khan took a brilliant catch in the slips. Ab De Villiers was scoring all over the place. He was South Africa’s last hope for winning this game. He scored in every part of the field. Productive shots. Brilliant skills. A cricket masterclass was happening. But Pakistani paceman, Sohail Khan had other ideas. When the scorecard read 200, Sohail Khan proved to be the game changer. He took the wicket of the South African captain. De Villiers got deceived by Sohail Khan’s short ball and was caught behind by the Pakistani wicket keeper. Imran Tahir was the last one to fall.

Sarfraz Ahmed got the man of the match award. He took 6 catches in this match. He set a record for the most catches by a wicketkeeper for Pakistan in a World Cup. Not too shabby, for cementing your place in the side.

Pakistan win their 3rd consecutive match in the World Cup. Beating arguably the favourites, they now have a chance to qualify for the quarter finals. Their last pool match is against Ireland who are playing Zimbabwe today.

The people of Pakistan have gone ecstatic with today’s victory. The team has brought smiles to the people. With its unpredictability, Pakistan has now announced itself as a serious contender for the title now.