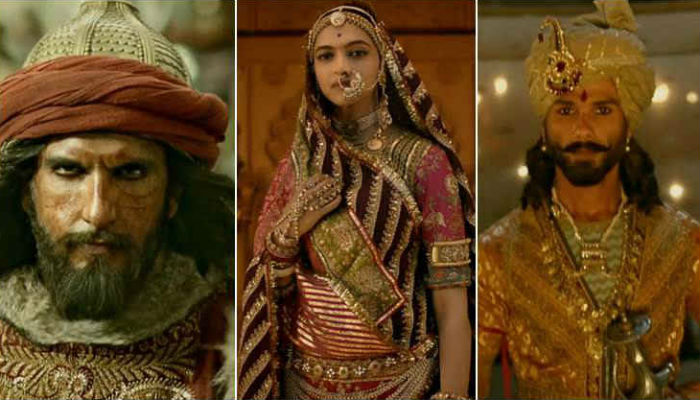 If you haven’t heard about new project, there’s a slight chance you’re living under a rock. Padmavati, which is all set to hit cinemas on 1st December, has created quite a stir in the Bollywood industry. The lead actors, Deepika and Ranveer, will be collaborating with the director for the third time, previously having worked for him in Raam Leela and Bajirao Mastani.

Actors Release Their First Looks of the Film

Ranveer will be seen playing the character of Alauddin Khilji, an old fashioned warrior and a dangerous ruler of the dynast. Deepika, on the other hand, is portraying the character of Rani Padmini, sporting a regal look and a unibrow (talk about fierce). The film also stars Shahid Kapoor (who plays Deepika’s husband) and Aditi Rao Hydari (as Ranveer Singh’s wife) in supporting roles. Raza Murad is also a part of the film and plays the character of Jalaluddin Khilji.

Fun Fact: He released his look on Twitter 2 days back but then deleted later for unknown reasons. Don’t worry, HTV has his Padmavati look for you right here! Theatrical posters for the film have been well-received, and hint at a story of the Indian royal times. This has the critics praising Ranveer for his versatility and the fact that Deepika is back for more work in her country. Karan Johar, another renowned director, also commented on Deepika’s look, saying she looks beautiful. He also commented that the attire brings out the queen aspect of her personality. The story revolves around Padmini, a 14th century queen and her rule. Rumor has it that the leading stars sought out psychiatric help soon after shooting the film, since they play such negative roles. Needless to say this created a buzz about their upcoming performances. The official trailer is expected to release during Diwali.

Critics Praise Ranveer for His Diversity

Ranveer released the poster of his look on Twitter getting a lot of excited reactions from his fans. People are commenting on the dangerous vibe the poster gives off. There have been comments like ‘khatarnaakk’ and ‘old beauty ‘ after seeing the actor’s tweet.

The Bollywood Power Couple Is Expected To WOW You!

The audience cannot wait to see Ranveer and Deepika set the screen on fire again with their on- stage chemistry. The success of their previous films is one more reason why people are eagerly waiting for it.

It's all in the eyes baby!

Stay tuned folks, there’s more to where this came from!

What’s your opinion of Deepika and Ranveer’s looks?