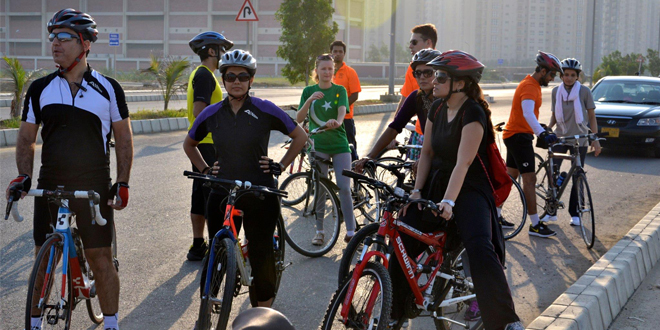 Pedaling Through Karachi – A Woman’s Tale

It was just another rough day at the hospital when my friend invited me to a pedaling endeavor on the streets of Karachi.

I thought to myself,

“Cycling, in Karachi? Why would someone pursue cycling had they been working out in the gym? Or risk their lives to flaunt their recreational mood on a good day? Could it be safe, keeping in mind the safety concerns and political unrest for the past few years? What do medical professionals do in their idle time?”

I sat behind a desk flooded with in-patient files, broadening my perspective on harmless fun in Karachi. Being an adventure aficionado, I left behind a lot of memories of creative writing and favorite sports which began their slow decline as I entered the realm of medicine.

Taking the sage advice, we decided to ride solo because my friend feared I will unleash my wilderness on to the streets. However, I kept my cool and didn’t hit the roads and limited my edition to parking spaces and sea front. After much decent practice, we departed succeeding morning prayers and embarked on different routes decided prior to departure.

Cycling re-defined life in Karachi and the people I cycled with totally had me re-imagine its limits. Every Sunday, over 100 cyclists joined and rode into different parts of Karachi; of course the line of travel was carefully selected in accordance with safety concerns. The group also announced competitions by the kilometer and planned trips to slightly remote islands, beaches and the highway.

During one of my rides, I met a woman who owned a 1000cc motor bike and discussed her lifestyle and the taboos attached to it. Her rousing story moved me when she disclosed how she performed daily chores including going to work on her motor bike. Graduating from foot to cycle empowered me with my right to move around freely.

I thought, why not ride to work? I found it difficult initially as people cooled their eyes off, followed me briefly, mouthed obscenities, and mistook me for a daughter of anarchy; nonetheless, they failed to throw me off my pedal. People en route became accustomed to my standard routine and I was praised by my fellow colleagues who drove my confidence over.

The government perhaps could join hands to promote this two-wheeled action and act upon building a network of segregated lanes for bikers for a safer journey and prevent danger posed by trucks and under-construction roads. However, cycling in Karachi is not as safe as people might think. Female riders suffer disproportionately as drivers are impatient against their slower average speed. We need to polarize all the fractious groups on a united front to get these basic facilities take form.

My story is perhaps another women empowerment story on wheels, defeating the conventional notions of female domesticity. Defying the repressive tradition, women should use this mode of transportation to reach schools and offices, healthcare facility and other workplaces. I’m content with the activity as it keeps me fit and healthy, mentally empowered and physically forward. Perhaps a hashtag trend could spell out which way the masses pedal!

About the author: Dr. Eman A Khaled is currently working as a Junior Resident in Diagnostic Radiology, Karachi, Pakistan. She is originally from Barcelona, Spain and also works with Pfizer and Pakistan Red Crescent Society. She is also involved in clinical research at King Fahd Medical and Research Center, Saudi Arabia.