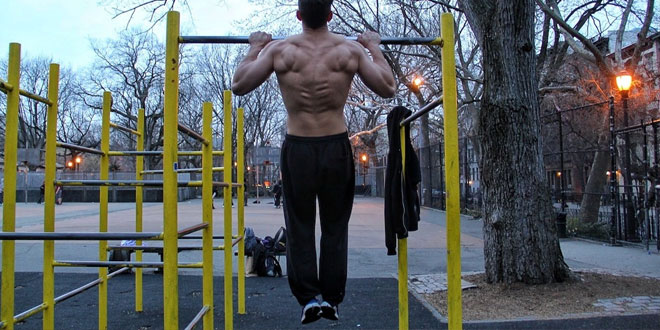 So, finally you’ve decided to change your lazy lifestyle. You want to lose those love handles and tone up your muscles. But, you are not yet ready for the gym. Here is an idea, why don’t you take up calisthenics? Calisthenics is the use of body weight to exercise. This burns fats and tones up muscles and the best of, you can do it at home. But, since everything has pros and cons, here is what you need to know before taking up calisthenics.

Perhaps one of the biggest advantages of calisthenics is, as mentioned before, that it can be done anywhere. There is no requirement of a specific environment or equipment. This also reduces the excuse for missing a workout. It saves the cost and time of travelling to the gym. It is also inexpensive because, you need not to pay for gym memberships or invest heavily on equipment. You will, however, need to buy things like pullup bars, but that does not cost much. Calisthenics is considered to be more athletic since you use your own body weight to become stronger and build bigger muscles. It builds a well symmetrical body since there is little chance of lifting asymmetrically. Perhaps an even bigger advantage for most people is that it almost always involves compound exercises. These exercises involve multiple joint movements due to which a group of muscles is involved (example; pushups which involves chest, triceps and to a few extent shoulders). This increases overall strength and burns more calories as compared to an isolation exercise. This compound exercise can be used along with High intensity interval training methods to maximize fat burn along with building muscles. Hence, most calisthenics have lean mass.

Even though calisthenics sounds easy, it is not. You might think, all you have to do is do some pushups and pullup, but it is more difficult than that. You need proper knowledge and coordination, especially in the beginning. For you see, it is easy to lift straight up and bring it back down, like that in weight training, but that’s not the case with calisthenics, it has more complex movement, doing them wrong may lead to injury. Speaking of injury, you cannot train around an injury in calisthenics since most exercises are compound. For instance, it would be really difficult to squat with a bad knee. To isolate an injured joint, you need to do isolation exercises which are pretty uncommon in calisthenics. But the biggest disadvantage of calisthenics, in my opinion, is that there is a limit to muscle mass you can gain out of it. Remember plateau? Yeah, that’s the biggest enemy of calisthenics. In training, there comes a time when your body will get used to the workout. This is, when you plateau, you will stop seeing further progress. To induce hypertrophy, you need to make the workout more challenging by the use of weights and different workout methods. Which, I guess, not everyone has knowledge and excess to.