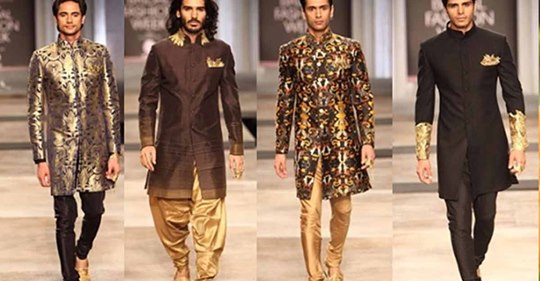 We have seen our male celebrities rock the western attire but when it comes to traditional outfits, we know that no one else can pull it off better.

In this article, we will enlist male celebrities who we think can ‘walk the walk and talk the talk’ when it comes to being a full fledge fashionista in desi attire. Style, flare and charisma – Pakistan’s number one actor, Fawad Afzal Khan has it all! Pakistani heartthrob, Fawad Afzal Khan knows how to look absolutely stunning when it comes to pulling off ‘desi attires’ to their best. Sheheryar Munawar, one of the bright actors of this generation, looks elegant in shalwar kameez and sherwanis. He appeared in the National Foods advertisement a few years back, and displayed to the world how good he looks in desi attire.

The voice of Pakistan, Atif Aslam can surely take any desi attire and turn it into a masterpiece. Actor turned political show host, Hamza Ali Abbasi definitely knows how to carry the desi look elegantly. With his glowing face and ravishing beard, he knows how to make the show stop. May it be an award show or a political showdown, you will see him performing to his utmost best every single time. Imran Abbas is yet another celebrity who can pull of the desi look to perfection. With his charming face, he can surely make girls go wild when he comes on screen in traditional shalwar kameez. Arguably, the most handsome cricketer of Pakistan, Shahid Khan Afridi aka Mr. Boom Boom, surely knows how to go back to his traditions and dress up like a true Pakistani celebrity. He loves the desi attire so much that he himself has launched his own Kurta Collection which is being praised not only in Pakistan, but worldwide as well.

Whether he is hosting a game show or acting in a movie, he can make his traditional kurtas a part of his character without even trying hard. Which one of these celebrities do you think looks more handsome in desi attire?