Earlier this decade, I did a short radio interview with an up and coming artist- Taimoor Salahuddin, a.k.a Mooroo. He had a few songs to his name. They were good, we played them often. I often wonder how weak my intuition was that I did not see this coming. By ‘this’ I mean the development of Mooroo as an artist.

It is not Mooroo the musician I am referring to per se, but rather the creative powerhouse that he has become. Even a few years ago, while listening to my personal favorite ‘kahaani purani’, I missed the signs of creativity that he displayed in his music video. While not honed, they were there. More obviously present in Mariam, the song and the video (WOW, am I right?).

Over the years, he did some collaborative work with comedian, Faiza Saleem and I assumed he didn’t find the happy ending he was looking for in music, despite giving us a gem like Mariam and a hard hitting video to Bandar.

“I like watching films so I thought maybe, I’ll enjoy making them too. Or being involved in the process of making them, at least”

All that said and done, Mooroo’s shaadi video surfaced. A deeply personal insight into his own wedding; the days leading up to it, an angle provided by his super real (and super talented) wife (Eruj Hadi), the events themselves, and most importantly the keenness in providing an appropriate tribute to Eruj. The video was a hit. Of course, receiving all sorts of attention. Of course, a lot of negativity. And of course, the due credit it deserved. We aren’t all judg-y little sh**s. 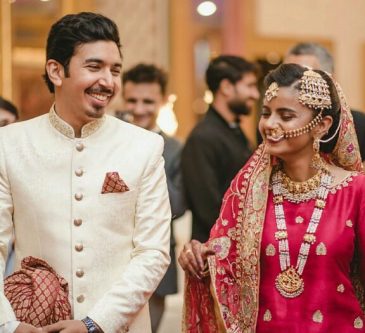 “I try not to think about the response of the video, I need to be satisfied with my final edit. I make what I want to express and what I would like to watch.”

Fast forward to what this article is supposed to be about. Mooroo’s latest release: The Self Made Man. Why give this particular vlog entry the attention? Call it the curse of the Pakistani Millennial; it struck a chord. Caught between what one wants to do and what one should do, the new (promised revolutionary, youth) untitled current workforce finds itself unable to set roots and more so, set goals.

Untitled Work Force: work in a start-up with nth enthusiasm levels. Throw out the concept of set hours (burn-out is the latest job expectation). Work without a growth plan. Don’t particularly know what their job description is. Goals, we’ll figure them out; deadlines, they depend on someone else getting the job done; dream job, always evolving.

That’s just the script of the vlog I’m highlighting here. The execution is flawless. The transition music, the bang-on placement of effects, the appropriate comic relief coupled with the message delivery- it’s all enough to applaud Mooroo’s film-making style.

“The thing with film-making is that it brings together everything that I enjoy. Acting, writing and music- in one medium”

The Self Made Man, takes us through the relatable process of professional fulfilment. Especially when what you want to do in life (call it passion), is supposed to keep you afloat financially too.

(“Whatever failures I was faced with, I would place the blame on others. They wouldn’t let me study acting!”)

Never where we are because of the decisions we have taken, because we never wanted to take those decisions in the first place. If it wasn’t for this…

The mantra that throws you in the pits of self-despair. In expectation of someone, anyone, to do their share of uplifting you.

(“whatever I would do, would be left incomplete”)

A perpetual inability to follow through with the enthusiasm that an idea was conceived with.

(“I had many plans/ideas. Enough chilling; time to work”)

Ideation is where the market saturates. All talk and nothing to show for it. It’s a call for movement.

(“Whoever I am, is the result of how I’ve been raised”)

It’s easy to blame others for your failures and equally easy to take the credit for your success; does the receiver deserve either accolade?

We’re all where we are right now, with nowhere to go but where we want to go and nothing to do but follow our paths. So let’s do it.

Dear doctor, are you strong enough to be weak for your patient?