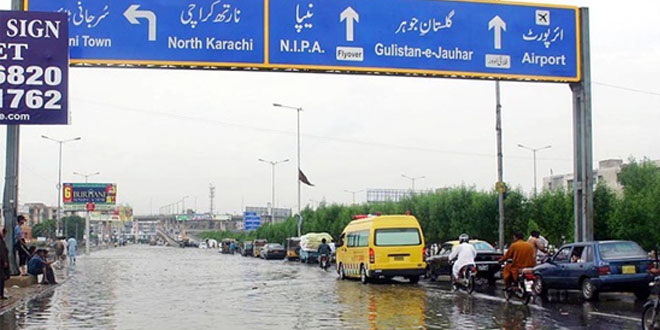 Provincial Disaster Management Authority (PDMA) has warned of urban flooding in low-lying areas of Karachi such as Malir and Lyari. PDMA assistant director Ajay Kumar said this warning is based on the Pakistan Meteorological Department’s recommendations.

The met department has mentioned that there will be heavy rainfall in the city beginning today and will last throughout the weekend till Monday. These heavy rains, including the nullahs attached to river belts, can cause urban flooding.

According to a met department official, it is expected that we can see around 50 to 60mm of rain in one day. According to past experiences, even 20mm of rain can leave the city devastated.

Due to the negligence of the Karachi Metropolitan Corporation, storm water drains have not been cleaned properly due to violations of people dumping trash in them constantly. Because of this, senior municipal director Masood Alam has warned the possibility of the city being submerged in rainwater.

KE spokesperson Osama Qureshi has accepted the failure, but mentioned that it was not a complete breakdown. According to him, a breakdown “is something due which the entire city plunges into darkness.”

He mentioned that there were a few faults, but KE teams were working through the night to restore power to the areas by 5am.

Here Are 5 Best Food Combos To Have During The Rain

Evergreen Review: The Healthiest Kid On The Block Is Gaining Mass Popularity

5 Things in Karachi That Are As Good As #AndayWalaBurger