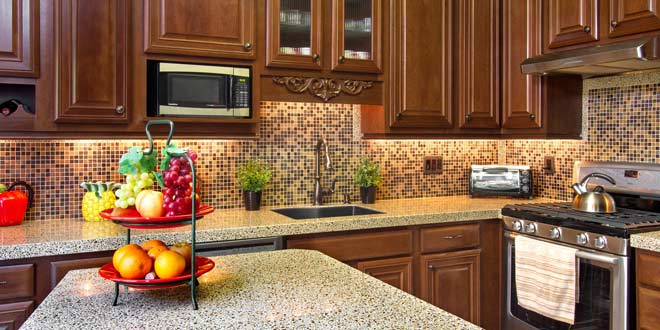 A study by the Cornell Food and Brand Lab has found that cluttered kitchens – and a cluttered mindset – can cause you to consume more calories.

In their study, designed to explore how a chaotic environment can influence how much women eat, the researchers asked half of a group of 98 female participants to wait for someone in a cluttered and untidy kitchen which had dirty dishes in the sink, disorganised tables, and newspapers strewn around. The other participants waited in the same kitchen, but when it was tidy and uncluttered.

In both its tidy and untidy states the kitchen also had bowls of cookies, crackers, and carrots available for the women to taste and rate as part of a survey. The women were told they could eat as much as they liked.

Before the participants entered the kitchen however, the researchers the women to write about about either a time when their life felt particularly out of control, a time in when they felt they were in control, or give a neutral response.

The results showed that the participants who waited in the cluttered kitchen, and had a more chaotic mindset after writing about a time when they felt their life was out of control, ate more cookies and consumed more calories – 103 in total – compared to the women who were in an in-control mindset and waited in an uncluttered and calm kitchen – who consumed just 38 calories.

“We found the more cluttered and confusing an environment was, the more people ate,” says co-author Brian Wansink, director of the Food and Brand Lab.

“It made them anxious, and when they got anxious, they ended up eating more cookies.”

The cluttered kitchen environment had no effect on the consumption of crackers or carrots however.

However a relaxed mindset seemed to counteract the cluttered kitchen environment, with the researchers finding that the participants who wrote about a time in their lives when they felt in control ate around 50% fewer snacks than those who felt more anxiety and stress.

Lead author Lenny Vartanian also commented on the results saying, “Being in a chaotic environment and feeling out of control is bad for diets. It seems to lead people to think, ‘Everything else is out of control, so why shouldn’t I be?'”

And although the study only used female participants, Vartanian added he expected the same results would also be seen in men.

However it isn’t all bad news for dieters, with the solution seeming to be fairly simple.

“Although meditation, as a way of feeling in control, might be one way to resist kitchen snacking for some, it’s probably easier just to keep our kitchens picked up and cleaned up,” said Wansink.

And if you can’t always keep your kitchen uncluttered, keeping your mind uncluttered will also work, with the team concluding that taking a moment to remember a time when you did feel more in control could also help women avoid feeling anxiety, and overeating.

The research was published in the journal Environment and Behavior.