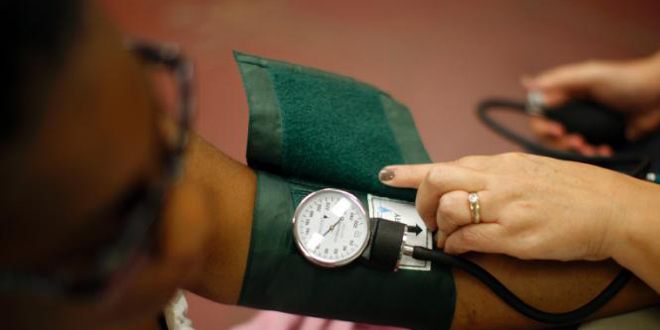 A more aggressive approach to lowering blood pressure could help millions of people over age 50, according to the results of a major US study published Monday.

Patients who lowered their systolic number, meaning the higher of the two figures used to express blood pressure, to less than 120 mm Hg saw their risk of heart attack, heart failure or stroke drop by 24 percent, and their risk of death plummeted by 27 percent.

In September, the National Institutes of Health-sponsored study was stopped a year early due to the positive results. On Monday, a detailed report on its findings was published in the New England Journal of Medicine.

“The positive results of this trial have taken most investigators by surprise, and the strong benefits of treatment seem to outweigh the risks,” said co-author Alfred Cheung, chief of nephrology and hypertension at University of Utah Health Care.

However, more research is needed before health authorities can recommend a change to current guidelines.

“Before deciding to treat blood pressure aggressively, it may be prudent to wait until additional questions are answered,” Cheung added.

The treatment, which involves using medications to lower blood pressure along with healthy lifestyle choices, also came with an increased risk for some serious side effects, including blood pressure that fell too low, fainting, and kidney problems.

Researchers are also still investigating how the treatment might affect cognition, dementia and kidney disease.

The study involved more than 9,300 people who were randomly assigned to a blood pressure target of either 120 mm Hg or 140 mm Hg.

All the study participants were aged 50 or older and had faced an increased risk of cardiovascular disease, having a systolic blood pressure of at least 130 mmHg.

They also had no history of diabetes or stroke, a requirement which made the study population majority white, and tended to exclude many African Americans and Hispanics.

About 16.8 million people in the United States would fit the study and criteria and therefore might benefit from the approach, researchers said.

“Given that millions of US adults meet SPRINT eligibility criteria, the implementation of SPRINT recommendations could have a profound impact on how blood pressure is treated in this country,” said senior author Paul Muntner, a professor of epidemiology at the University of Alabama.

“Even more important, is its potential for greatly reducing the incidence of cardiovascular disease.”

10 Foods That Can Lower Your Blood Pressure