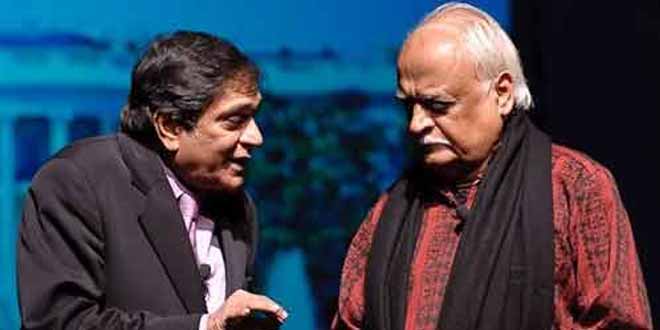 Laugh Your Way Through Life

The Pakistani entertainment industry is flourishing day by day, giving us flawless shows, sitcoms, comedy serials and now movies. Pakistani comedy shows and comedians have never failed to spread laughter. The entertainment business unquestionably is thriving today because of them.

If we talk about some recent comedy serials we realize how fast our industry is improving and getting more and more pro-efficient by providing us quality entertainment. Previously, comic serials like Azar Ke Aige Barat, Dolly Ke Aige Barat, Takay Ke Aige Barat and Annie Ke Aige Barat have been astounding audiences all over the country.

If we go back in time we have some incredible shows added to our industry’s repertoire like Loose Talk by Moin Akhtar(Late) and Anwar Maqsood.

It is wonderful to see how young writers and comedians have taken inspiration from the maestros of comedy like Umar Shareef, Bushra Ansari, Moin Akhtar (late), and Anwar Maqsood and are presently prodcuing delightful comic drama shows for our television screens.

Here are some recent comedy serials that hit the popularity table on its high:

Debuted in 2012 on ARY Digital, the drama got fame not long after its starting broadcast because of an extraordinary story line breaking clichés and providing quality humor and family appropriate content.

QSKB was appreciated across the nation not just for its humor filled screen play and dialogues but also for the reasonable events that many people can relate to. The tremendously anticipated comedy serial had a prime time slot, thus, families and individuals never used to miss this heavy dosage of laughter.

Undoubtedly the comedy serial had a script filled with humor, also the performance of every single actor justified itself but an enormous reason behind the success of QSKB was the excellent acting of Hina Dilpazer who was seen playing more than 10 different roles in the same serial making it look like a one woman show.

Hina played every character she was assigned and pulled them off in style. Every one of her characters was solid and not once was she seen shaky or confused on screen.

The story of a flirty landlord Aleemdeen and a gossipy old widow Shakooran Begum who had daughters, all one of their own kind is a must watch comedy serial.

Those who have not yet seen this, should easily find it online. Quddusi Sahab Ki Bewah is written by Fasih Bari Khan and Directed by Mazhar Moin.

Premiered in 2008 on ARY Digital, the comedy serial soon got pretty popular in all age groups of the country. This comedy drama is basically about a family of four who were always seen in trouble.

In the beginning the serial only had 3 characters, Nabeel, (Ayesha Omar) Khubsoorat and (Mehmood Aslam) Mehmood Sahib yet after the entry of Hina Dilpazeer as Mumtaz (Momo) the notoriety of the show rises and reaches up to 8.0 TRP which is truly astonishing. The entrance of Momo attracted the masses and Bulbulay started trending.

Most scenes are about Nabeel and companions being fooled, looted or simply having misfortunes along the way. Each scene closes with the family being in a mess, or both of the men getting thrashed from their wives for playing with other ladies.

Having Bulbulay on TV is like having a treat. After quite a while, viewers have a comedy series on TV that is actually entertaining, with a significant piece of humor based on absent mindedness.

On the off chance that you have not viewed this sitcom yet, you must watch this show to have some good times with your family. Bulbulay has a record for having the highest ratings ever for a comedy series and it has scored a rating of 8 TRP’s which is by far the maximum compared to any other comedy series of the country.

Bulbulay has secured the best sitcom award for 3 consecutive years, 2010 to 2012. It is expected that after so much success Bulbulay will be aired soon in UK and India. The writer of this drama serial is Ali Imran while the Directors name is Rana Rizwan. The executive producer of this sitcom is Nabeel, the lead actor of the sitcom.

A recent presentation by the Showcase Productions of a house full of different individuals, each who have distinct roles to play, became a popular hit in no time.

The cast includes young emerging talented artists such as Mawra Hocane and Shahroze Subzwari as well as pioneers like Seemi Pasha, Javed Sheikh, Khalid Anum and Moammar Rana. Like most comedy shows, this TV series is known to have glued ARY digital’s audience to the TV.

The audience loves the romantic comedy genre that is depicted in the drama series where both elements of romance and humor merge.

2014 has clearly been a year that has brought Pakistan many comic hits. The year 2015 has just begun we hope so see greater comical hits in the coming years.

Simple Ways to Add Positivity to Your Life

How To Look At The Bright Side Of Life

Keep Your Joints Healthy, and Live a Happy Life