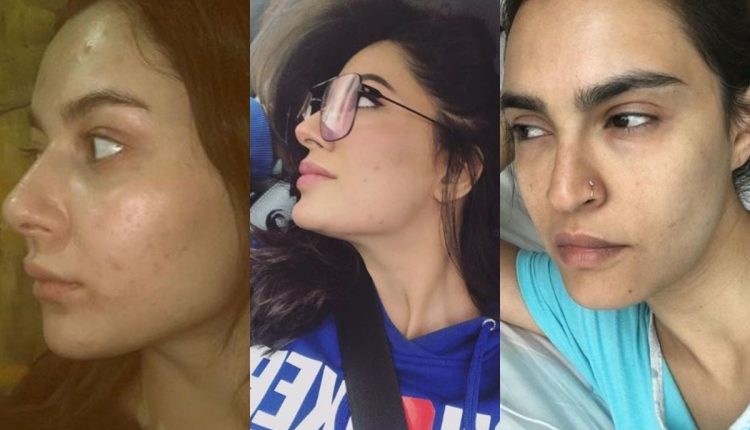 The year is 2005. A senior in my school doesn’t have the ideal skin rather she has acne so her face often has pimples and blemishes. She is a high-achiever but the one name remembered till date about her is ‘Daanedaar’ loosely translated as someone who has a lot of pimples while also being a pun on a type of tea.

Fast forward 2019. That senior has gone places with an excellent career but the term used to describe her comes back to me (and maybe her) like a boomerang when an actor, Hania Amir, gets called ‘Daanedaar’ for owning on her personal Instagram that she has had mild Acne which led to a lot of anxiety but now she will not let the illusion of ‘clear skin’ define her life.

Hania got ridiculed by fellow artist Yasir Hussain just because she owned the way she looked. Within minutes of that, her face was being morphed as a meme which only shows that women who decide to challenge the stereotypical beauty standards are only met with harsh trolling. However, Hania just stood her ground and on her Instagram story subtly called out those making fun of her skin condition, who paid no heed to the stress and anxiety it would induce. 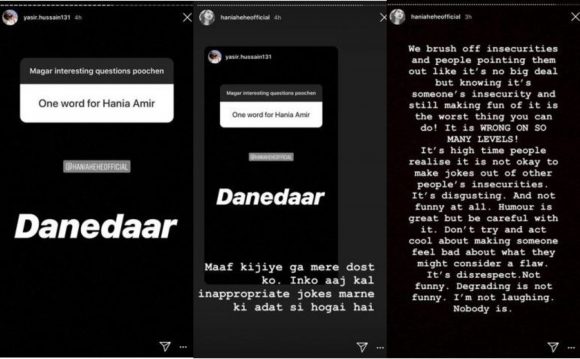 Celebrities are often expected to appear a certain way, and let’s face it, a few years ago the listicles which showed celebs with and without makeup got a lot of hits, rather they still probably do. After all, don’t people love to see how ‘ordinary’ their favorites look, while also enjoying the delusion that they ‘woke up like that’.

Heck, how many times do women get told that they look sickly if they do not wear kajal or lipstick because there is a certain body image which projected so often that women too start believing this narrative which doesn’t want them to look ‘beautiful’ rather it wants them to fit the beauty box which it has crafted for them.

In 2016, Bollywood actor Sonam Kapoor wrote in a Buzzfeed India article ‘I Didn’t Wake Up Like This’ how she went through a terrible time hating her body for fat, cellulite, her skin color and even her height. She said, “We’ve been taught that women need to be flawless even when our flawlessness is wildly implausible,” and it made so much sense when I read it back then. Yet I am quite sure that still we would try our level best to look ‘best’ in accordance with the beauty standards which are well fueled by patriarchy and its best friend, capitalism.

Celebrities like Mahira Khan, Hadiqa Kiani and Bushra Ansari have also spoken about the way a popular personality is perceived in public with regards to ageism, and all three stressed that they have embraced it like they should instead of finding ways to hide a natural process which should be celebrated instead of fearing.

Hollywood actor Carrie Fisher who reappeared as Princess Leia in Star Wars: The Force Awakens also received a lot of backlash by her fans who thought ‘she didn’t age well’. Fisher who was alive at that time got back to such people on Twitter, endorsing a tweet that “Men don’t age better than women, they are just allowed to age.”

The normalization of aspects like skin conditions, hair fall, aging or body hair should be encouraged to tell all women that it is absolutely acceptable to not get a botox or a skin treatment which may cost them an arm and a leg.

Even in our daily lives, we are prone to use apps like Snapchat and Instagram which come with numerous filters which just make our skin so clear that deep down we aspire to give that look some permanence. Amusingly enough, these filters also stick to the status quo by thinning the face, making it look fairer, or making lips seem more supple all the while under the garb of harmless bunnies, kittens and puppies.

The pressure of looking ‘pretty’ is such that women who become mothers are also expected to shed their weight without any concern for the mother who has just been through a very traumatic phase and would need to heal, emotionally and physically, at her own pace. Rather these women are told to wear shapers and go through demanding routines to bounce back to their pre-mother self.

However, it does not mean that women must stop taking care of themselves but they must not follow strict regimes which only invite stress. Self-care must become a part of our lifestyle especially because it is not restricted to just the looks rather it includes mindfulness, making healthier choices and not constantly haggling with nature. Women usually do not have time to look after themselves because of various reasons.

Related: 3 Things About Body Positivity Everyone Needs To Know!

Those who do not belong to the affluent classes may not be able to afford weekly visits to salons or get membership at a sought after gym, and may not always find time to follow remedies. But this is where ‘self-care’ steps in for the person as opposed to what the society demands. Self-care is not to please those who would still find some flaw, rather it is a way to thank nature for the body by giving love and affection to all parts which help us live our life.

Human body is full of flaws which cannot be controlled all the time so instead of opting a way to harm our skin, hair, and growth by using unsafe products and spending savings, it is better to accept our body the way it is, because the first right to our bodies belongs to us only, no one else.