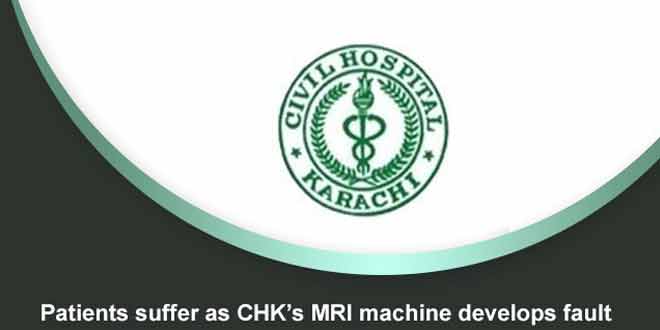 The Magnetic Resonance Imaging MRI machines of three major hospitals of the city have been not functioning for the last several days, causing immense hardships to patients, particularly those suffering from psychological and neurological problems.

According to sources, the MRI machines of two major hospitals – Jinnah Postgraduate Medical Centre (JPMC) and Abbasi Shaheed Hospital (ASH) – have not been functioning for the last two weeks due to some fault, while the Civil Hospital Karachi’s (CHK) MRI machine has been lying out of order for the last one month.
An official of the CHK confirmed that MRI machine had developed some fault about a month back and the fault has not yet been rectified.

The sources said that in the absence MRI machines, patients at all the three hospitals have no choice but to undergo the MRI tests at private hospitals and laboratories where fee of an MRI ranges between 5,000 and 20,000.

As far as MRI of patients at the CHK is concerned, no fee is charged there whereas the same test at the ASH and the JPMC costs between Rs1,500 and 3,000, the sources added.

Karachi Metropolitan Corporation’s senior director (Health and Medical Services), Dr Salma Kusar, when contacted, said that the ASH administration has not brought the issue into her notice. “I will, however, probe into the matter,” she added.