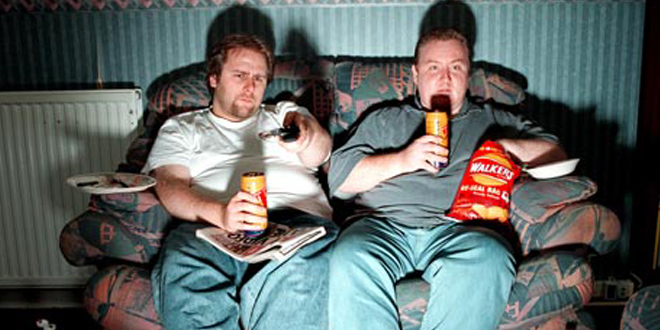 So you want to lose weight but don’t have either energy or time for cardio and you just hate going on a diet? What if I tell you that you can lie on your couch watching Game of Thrones while eating left over pizza and still lose weight?

Sounds impossible, right? Not really, but here are a few lazy ways to reduce the weight

Can something this simple help you lose weight? Yes. This amazing liquid with zero calories does wonders to your body. According to a research, drinking 500 ml of water after you wake up speeds up your basal metabolism rate (BMR) by up to 30 percent. A faster metabolism means you are burning more calories when the body is at rest.

What’s more is that drinking an ample amount of water throughout the day fills up your stomach, giving you a feeling of fulfillment. It has also been seen that people often snack more due to inadequate water intake. So next time you feel hungry, try a glass of water instead.

If you find water plain and boring, you can drink green tea instead, which is a detox. It speeds up the burning of calories and in addition it also increases insulin sensitivity, hence the carbs that you consume are used up for energy rather than stored up as fat.

That’s right! You can lose weight by doing your favourite activity – sleeping. Getting enough sleep is crucial for weight loss and it burns up more calories than watching TV. Insufficient sleep unbalances your hunger regulating hormones. It increases ghrelin – the hormone that tells you that you are hungry – and decreases leptin – the hormone which tells you that you are full.

SNEAK IN A WORKOUT

A bit of a workout in your daily life will help lose fat faster than any other thing. Now, I am not asking you to go to the gym, all you have to do is sneak in small workouts in your everyday routine. Taking stairs instead of the elevator, walking to the shop rather than taking your car, walk around in your office to stretch your legs, go grocery-shopping instead of sending the youngest in the family to do it, are a few examples which will help you to reach your desired weight goal.

Simply increasing protein consumption in your diet helps lose weight over time since protein utilizes more energy for digestion as compared to carbohydrates. It also gives a fullness satisfaction so you don’t overeat.

Carbonated drinks are health killers. Among many harmful effects of soft drinks, increase in body fat percentage is one of them. These drinks contain fast digesting carbohydrates such as fructose which directly contribute to formation of fats rather than used up for energy

Apart from soft drinks, white bread, white potatoes, sports drinks, table sugar etc. are also fast digesting sugars, so stay clear of them. The only time it is okay to consume them is after a resistance workout.

Don’t skip the most important meal of the day. Skipping breakfast makes you feel hungrier as time passes by and when you do get your hands on food, you tend to overeat. Skipping breakfast will also make you feel lazier throughout the day, resulting in less activity and less burning of calories.

“I heard the Messenger of Allah saying: ‘No human ever filled a vessel worse than the stomach. Sufficient for any son of Adam are some morsels to keep his back straight. But if it must be, then one third for his food, one third for his drink and one third for his breath.’ – Ahmad, At-Tirmidhi, An-Nasaa’I, Ibn Majah – Hadith sahih

As said by the Holy Prophet Muhammad (PBUH) and proved by science, overeating has many harmful effects and the most obvious of them is obesity. So make a habit of eating till you are half full. Japanese use a similar technique to stay fit. As per the expression ‘Hara hachi bu’ meaning ‘eat till you are 80% full.’

Spicy food makes you eat less and drink more water. However, I am not implying that you add too much spice as that too is harmful for health. I am, although, speaking more specifically about black pepper. It contains a compound called piperine, which interferes with the formation of lipid granules and fat cells, resulting in a decrease in body fat, and cholesterol levels helping you get slim all over.

Although not very significant, but laughing can actually help burn those extra calories. According to a study published in the International Journal of Obesity, 10 to 15 minutes of laughter can burn up to 150 calories.

Stress/tension is yet another health killer. Stress releases a hormone called cortisol in larger quantities, which directly contributes to storage of fats in your body, increases appetite and breaks down lean muscle.