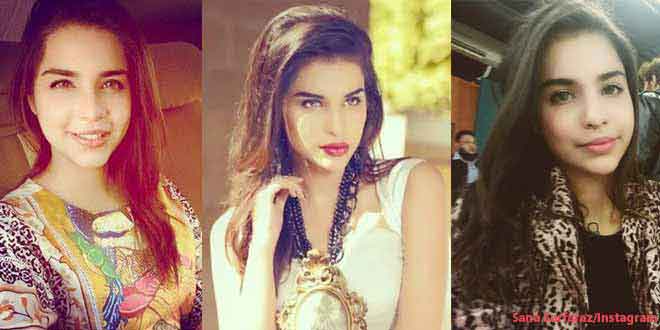 Stunning and bold, an eye candy of the Pakistani Fashion Industry, Sana Sarfaraz, is now all set to be the next big ICON of the fashion world. In a short yet impressive span of time Sana has been in the talks all over. The young and passionate lady was on the path to success straight away. She has been impressive by making it to the covers of some of the most elite fashion magazines of the country in a career of approximately 4 years. Sana took off like a jet. When we talk about being on RAMP, her walk was a complete stunner. The posture, attitude, glamour & aura she maintained on ramp was promising from day one. I personally witnessed nothing but a huge round of applause as she started with her first walk. The glare she had in those eyes is still there, which makes us believe there is a lot more to come from this young extremely talented and beautiful lady in the coming years.

Till now, Sana has modelled for countless fashion shows, magazines and designers and has several high profile fashion shoots under her belt. She has successfully managed to own a valuable and significant place in the industry by working for big names like Sania Maskatiya, Maheen Karim, Nida Azwer, Shaiyanne Malik, Layla Chatoor, Sehrish Rehan and many others. As time passed, Sana has not only grown her career but also has earned a very crucial and important position and status in the overall Media Industry of the country. Sana had been on television back in 2009 but made a revolutionary come back acting as a lead for several drama serials like “Zindagi Gulzar Hai” from Hum TV and many more.

This was not the end, or we might say, this was the start. Sana was spotted doing commercials for brands like Pepsi, National, Dawlance, Suzuki, SunSilk and many more big names. In a nutshell, we can easily say that Sana Sarfaraz has earned a huge media profile already, that also at a very young age.

Let’s see what she has in store for her followers, fans and lovers as we ask her a few questions, and get her response for Valentine’s Day.

Mirza (HTV): Were fashion and modeling always a passion of yours?
Sana: No, not really. In the beginning I did it for my pocket money and also to kill time. But then as time passed, I started taking it more seriously.

M: What is your preference: RAMP or Fashion Shoots?
S: Fashion shoots – because fashion shows/RAMPS in Pakistan are nerve-wrecking. We have to deal with unorganized back stages, extremely early call times, eleventh hour changes in rehearsals and outfits and finally, “models” have to run and fix things on their own and pretend as if everything is perfect.

M: What 1 word best describes you?
S: Deep-thinker. I think a lot! Especially about social issues and other peoples’ problems. I feel there is a lot to be done in this society, it has deep flaws and as humans being, we need to fix them.

M: Valentine’s Day is coming up. Do you celebrate it? Do you think love should be expressed only on this one day?
S: Well I have heard a lot of things regarding the story of Valentine’s Day, and I don’t know if it’s true or not. But whatever it is, I don’t mind it. I just don’t like over exaggeration. One can always celebrate it by wishing their loved ones, but I don’t encourage wearing all red clothes and having a display of affection in public. One should always be modest and should know their limits, because there’s a fine line between certain things and one should always know where to stop.

M: What makes you angry?
S: People with no morals, values or ethics.

M: What are you passionate about?
S: Social work and making a significant contribution towards our society.

M: What 3 people have influenced your life the most?
S: My mom, my sister and Mother Teresa.

M: What would people be surprised to know about you? Do you have some hidden talent?
S: I’m an orange belt, did judo karate when I was 12 but then discontinued.

M: What was it like being on RAMP for the first time?
S: Extremely nervous. I was shivering, I thought I’d faint at one point but thank God I pulled it off well.

M: Who would you trade (switch) places with for 24 hours?
S: Probably with the richest person of the world, and I’ll use all his money for a better cause, or you can say for a socially better cause like for needy people.

M: Have you ever had any issues working in the industry? Is working in the Fashion Industry a game for only bold and brave women?
S: Yes, I have always had issues and I still do. There are so many things that are not right. Payment issues, casting couch, lobbying and much more.

Yes, it is indeed a field only for women who are strong enough to handle all this unnecessary foolishness.

M: You are a super model now, where do you see yourself in the near future? Media only or something else?
S: Media just for some more time. But of course it’s not something I want to do in the long run. I’ll rather opt for a decent business soon and get settled with life. InshaAllah

M: As far as I know you love pets, you have a special place for them in your heart, especially cats. How far is it true that you own hundreds of cats?
S: Animals can’t speak but they do feel pain just like we human beings do. I believe it’s our responsibility to protect them instead of taking advantage of their innocence and torturing them for their fur, meat or milk. Presently we do not own 100 cats but we have definitely tried saving more than a hundred abandoned kittens. Once they grow up we let them go.

M: You are described as bold from the outside and extremely delicate, humble and friendly from inside. Is this true?
S: Absolutely. I just try not to show my weaker side to everyone. Not everyone, because people often get mistaken for your kindness towards them and end up making unreal assumptions. It’s more like “in a mad world, only the mad are sane”.

M: How important is health to you? What is the secret behind your sleek fitness?
S: Health is wealth (laugh). But no I eat a lot of fattening food but since my work is so tough I don’t gain much plus I’m one of those lucky ones who doesn’t have weight gaining tendency.

M: What last words can you say out for your fans, lovers, followers?
S: “To find yourself, think for yourself.” -Socrates

It saddens me when I see people following others without using their own mind or believing in their own self. I see them like a herd of sheep led by a stupid shepherd who’s only leading them for his own benefits and selfish desires. I hope to see a day when people would start thinking before doing something instead of just blindly following someone because everyone else is doing so. Especially when it comes to customs, traditions, myths or false beliefs in the name of religion and traditions, including following trends like taking “selfies”, dancing at mehndis, and wearing Hindu inspired clothes only because everyone is doing it. Also, following stupid fashion trends like “baggies.”

In the end I’ll just leave you with a quote I feel I can relate to very well. It is also a message from me to all those who love and support me:

“Whenever you find yourself on the side of the majority, it is time to pause and reflect.”     -Mark Twain.