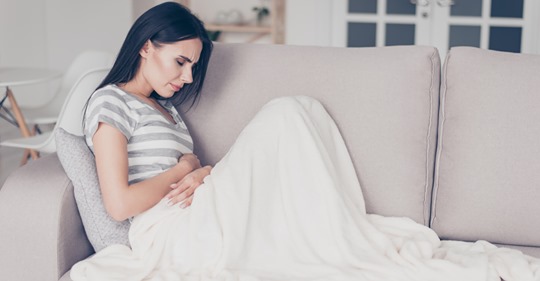 By definition, menstrual bleeding is the breakdown of the uterine lining in response to hormonal changes.

Without a pregnancy, the uterine wall doesn’t need to be thick and so the extrauterine cushioning breaks down resulting in menstrual bleeding.

On the other hand, if pregnancy occurs, the uterine wall becomes thicker to support the growth of the baby in the womb. Therefore, there is no wall breakdown and subsequently no bleeding throughout pregnancy.

Fast forward to nine months later. The baby is out, the hormones are coming back to normal, and the uterus also has to regain its original size and shape, which means a lot of additional tissue has to be shed, and this is seen as the first period after pregnancy.

No matter whether the delivery was through C-section or vaginal, post-partum bleeding is a normal physiological phenomenon. This vaginal bleeding is called lochia and can last from 2-6 weeks after birth, with the flow being heaviest in the first 3-10 days and then tapering down gradually.

This first period is often a difficult time for many new mothers. The blood flow is heavier and often associated with the passage of blood clots, which are darker in color and more jelly-like in consistency. Women may experience severe cramps, as the uterus contracts to expel the blood and tissue. Also, the bleeding is aggravated by physical exercise so as the mother resumes her daily routine and starts moving around; she may experience some additional bleeding.

All these symptoms can contribute to the post-partum depression that some women suffer from after childbirth.

Knowing What to Expect after You’ve Expected

Good obstetricians inform new mothers of these signs and symptoms beforehand so that the patient knows what to expect. Nevertheless, adverse events, such as infections, may occur and therefore new mothers are instructed to consult a doctor if they feel ill, shivery, and have severe abdominal pain.

The bleeding period will vary from person to person but should be handled in the same way as menstrual bleeding.

It is important to remember, however, that tampons should be avoided till 6 weeks after birth as tampons increase the risk of infection.

Just like pregnancy, post-partum bleeding should also be considered a normal physiological process. Although first-time mothers are often anxious about these symptoms, things get better with time and women are generally able to handle the situation better with subsequent pregnancies.

Ramadan and Pregnancy: To Fast or Not to Fast?