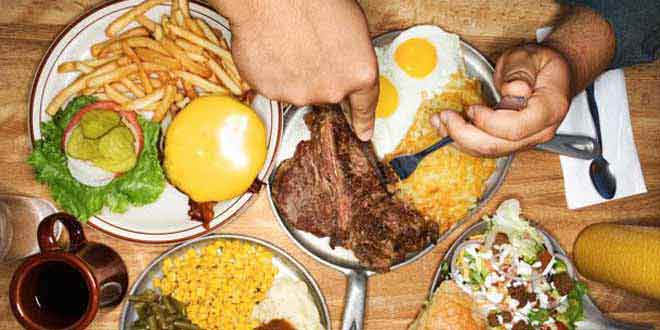 Why Do We Overeat?

Our body needs food to function and we have strong mechanisms in our bodies that make us crave food in order to survive. At the same time, we have a “stop mechanism” when we’ve had enough to keep from overeating. Therefore wanting to eat is a normal, healthy bodily function. The problem arises when you don’t know when to stop eating and consume an unhealthy daily amount. With the rise of obesity, much research has been done on the subject of eating and scientists have come up with two theories:

Food triggers a greater sense of reward (hyper-response) in some people who are over-eaters than others who are normal eaters, which can lead to obesity. Some people just get more excited at the thought of a French fry dipped in garlic mayo or can’t control themselves from eating that chocolate cake! These people have great food triggers and no impulse control when it comes to food due to the heightened sense of reward and satisfaction.

Over-eaters experience a much smaller pleasure (i.e. reward) response than do normal eaters. According to this theory, food gives less of a “high” to over-eaters than to normal eaters. If this is you, then you most likely find yourself satisfied only after eating two slices of chocolate cake while your friend was content after one.

Let’s pause for a minute here, because this might have confused you. The theory of HYPER-response says that those who are over-eaters have a higher sense of gratification from eating any kind of food even at small quantities, which can still lead them to continually eat that food. The theory of HYPO-response states that those who overeat don’t experience much gratification from eating small quantities of food, which can lead them to overeating to achieve their gratification.

The two elements to understand are food anticipation and food response. Food anticipation is when you look forward to the food and food response is the satisfaction you get when you actually have food.  It is possible that the anticipation is much more rewarding in some people than the response. You might find it more pleasurable to anticipate your food, but when you actually eat it, the pleasure and the level of contentment is just not the same. Thus, you crave more food and you start overeating in order to feel pleasure. Therefore, obese people have a different food response and process than an average, normal eater.

Scientists have used functional MRI (fMRI) to look at brain activity and understand this from a scientific and medical point of view. An fMRI will show if you find something delicious. When you eat something you like, parts of your brain will light up, including an area which is sensitive to dopamine (a neurotransmitter released in response to food). In a research study conducted in rats, it was found that higher dopamine levels corresponded with increased food rewarding. In addition, obese people had higher dopamine levels and receptors (which bind to dopamine).

So what does this mean for the overeaters out there who just need more food to feel satisfied? Start by making healthier food choices. If its quantity you’re looking for, then make sure it’s of quality and natural food. Skip the packaged and pre-made foods that trigger sugar cravings and lack satisfaction due to chemicals and low nutrient content. Eating these are like feeding drugs to a drug addict! Understanding your food issues is a huge step in the right direction. Here at HTV, we want you to stay healthy!