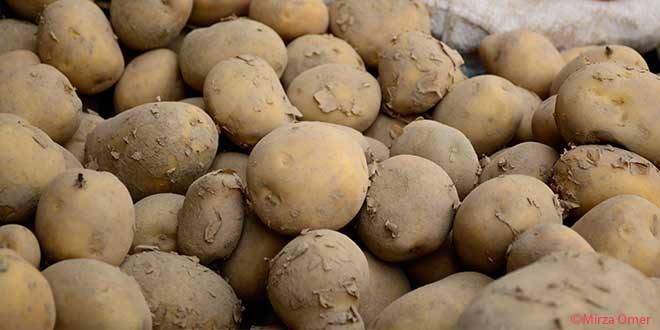 The Difference Between Sweet vs Regular Potatoes

Regular potatoes, or the beloved aloo, is a main stay in every kitchen since it’s used in traditional and non-traditional dishes. Sweet potatoes on the other hand, known as shakarkandi in Pakistan, have had mixed reviews, sometimes called a super food for all their health benefits but also vilified since they can be fattening with a sky-high Glycemic Index (GI). Both varieties are delicious, healthy and nutritious, and should be enjoyed! Let’s see how sweet vs. regular potatoes stack up.

How Are They Different?

In layman terms, they are both considered potatoes and have the same origin from Central and South America. However, when we go into the root of it, botanically they are completely diverse. To be technical, regular ones belong to the Solanaceae family, whereas sweet potatoes belong to the Convolvulaceae family. The regular potato from the Solanaceae family is related to tomatoes, eggplant and peppers. Plants in this family produce a poisonous substance known as solanine so remember not to consume any leaves or stems of plants falling under this group. Also, don’t consume potatoes that have gone green. However, unlike the leaves of regular ones, those of sweet are highly nutrient-filled and can be eaten!

Potatoes also differ in their starch content, which is indicated in the way they digest and how they react when cooked. Potatoes, which have a fluffy texture when they are cooked, known commonly as the ‘mealy’ potatoes, are ideal for baking and mashing. They are the type commonly found in Pakistan and are crammed with starch especially amylose. Another variety called the ‘waxy’ potatoes, have a high content of amylopectin giving it a gluey consistency. Due to this, they are more ideal for boiling and they digest at a lower rate especially when cooked and cooled. Similar variations are also seen with the sweet variety: differences in color, starch content, and ease of digestion.

Carbohydrates are essentially required by the body for vital metabolic processes and serve as a good source of energy. Both regular and sweet make great storehouses of carbohydrates, but with the prevalence of the Atkins and other low carb diets, carbohydrates have received a bad reputation. So potatoes are often defined as “too high” in carbs and taken off the menu. Most of the time, these tubers aren’t the real problem, it’s the quantity being consumed. Both regular and sweet varieties make highly satiating and filling foods due to their increased carbohydrate content so go ahead eat them but within reason!

Are The Sweet More “Healthy” Than The Regulars?

This myth originates from the increased consumption of regular potatoes in the form of French fries and potato chips, which are very unhealthy and linked to obesity. What science has proven about these two varieties is that neither is better than the other, and that both have complimentary nutritional differences. For instance, sweet ones are rich in Vitamin A and fiber, while the regular ones are good sources of minerals such as potassium, magnesium and iron. It is however, true, that sweet potatoes have a lower glycemic index than the regular ones. But it is also true that the regular potatoes are not typically eaten without side toppings which contribute more to the obesity than the potato itself.

The bottom line is that the thing that matters more is the form and quantity in which both are consumed and not the type of spud that it is.