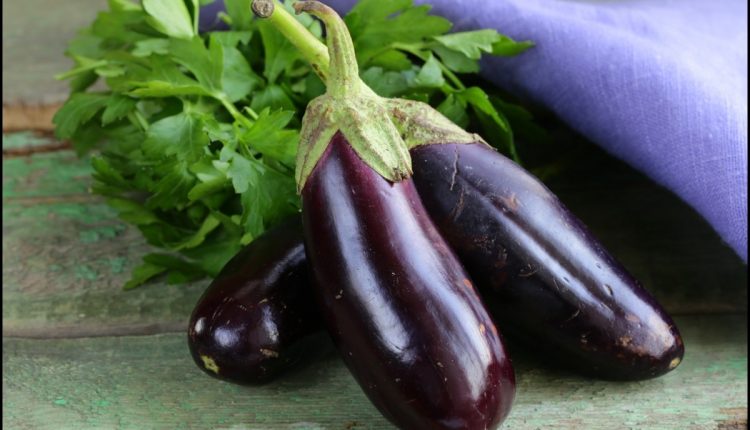 To some, eggplant can seem like an intimidating ingredient and be passed over at the grocery store, but it doesn’t have to be! They have a whole slew of health benefits and can be used to make everything from dips to main dishes and even chips. Let’s read about the super health benefits of eggplant or aubergine and what this purple veggie has to offer.

Eggplant, also known as Aubergine, gets its purple color from a substance called nasunin, a powerful antioxidant that protects the lipids (fats) in your brain and eats up free radicals in your body that can cause damage to cells. Aubergine also contains phytonutrients that keep your brain safe from toxins and increase blood flow to improve memory and cognitive function.

Eggplant is made up of 90 percent water making it incredibly low calorie. In fact, it’s roughly around 132 calories for the entire vegetable making it a good option for those looking to lose weight.

The fiber, potassium, vitamin C, vitamin B6, and phytonutrient content in this vegetable all support heart health. Research has suggested that the antioxidants in this veggie may help protect the liver from certain toxins.

Aubergine contain chromogenic acid that holds promise in many aspects of health very similar to the benefits of bioflavonoids. This means that it has anti-cancer benefits that may help get rid of harmful free radicals.

Eggplants are a good source of dietary fiber that helps stimulate the digestive tract and promote regular bowel movements, thus reducing the risk of certain diseases such as IBS and other digestive system disorders.

Eggplant juice is a source of phytonutrient terpene which can help prevent oxidation of cholesterol in body, more specifically healthful for the heart. Thanks to its high fiber content and low glycemic controller which won’t shoot insulin levels, eggplant can be used to control and manage diabetes. It’s a healthy low carb option with much to offer nutritionally.

As stated above, the presence of nasunin in aubergine can reduce cell damage and thus fight the effects of aging. Vitamin E, present in eggplant, also plays a role as an anti-aging nutrient due to its ability to improve moisture and skin elasticity.

Folic acid is required for a healthy pregnancy and healthy baby as folate is known to help prevent neural tube defects in babies.