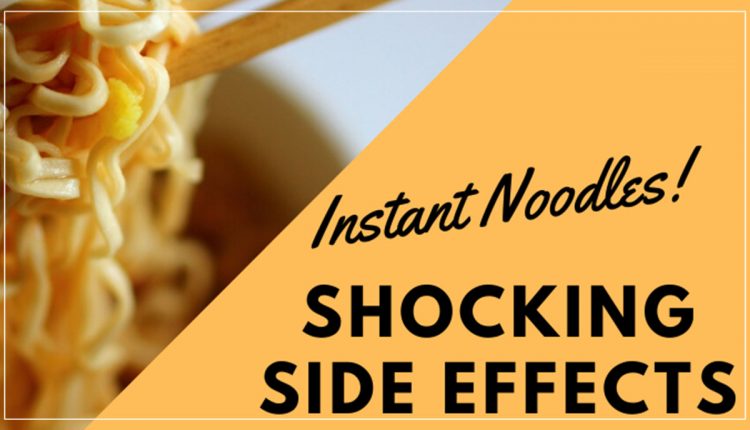 We all know the saying; nothing worth having comes easy in life. In this day and age, our list of things ‘worth having’ include money, fame, power, position, grand lifestyle and to be the best. This has come a long way from simpler times where health, a roof over their heads and food in the bellies what was accounted for a good living. Today, in the era of instant noodles and ready to eat meat, health has become a secondary concern to us. With this mentality, comes poor dietary habits, stressful jobs and lack of exercise. Quick and instant meals are all anyone has time for. With this comes, to no one’s surprise, the rise of instant noodles.

Instant noodles are precooked flour noodles that are boiled and dried into cakes to be packaged in plastic cups or packets. This has, in recent years, become a staple in most teenagers’ lives, especially college/university going students who don’t have time or money to afford a more nutritious meal. It also doesn’t hurt that instant noodles now come in hundreds of different flavors catering to the palate of different nationalities around the world. They also have a longer shelf life and can therefore, can be stored for long period of time.

Now I myself have been guilty of over indulging on instant noodles during all nighters or study sessions. It’s warm, soupy, and comforting. But have you ever looked at the ingredients mentioned on the back of each packet? Because I did that today and let me tell you, I don’t think I’ll be eating them anytime soon.

Other than certain words that I can’t even pronounce, one of the key ingredients on the package was MSG (Monosodium Glutamate). More commonly known as MSG, it is a chemical preservative derived from the petroleum industry that is used as an addictive to enhance flavors of processed foods. Although, its consumption in moderation is FDA approved, it has been a controversial ingredient known to cause many side effects. It has been known to cause spikes in blood pressure as well as nausea and headaches. Some studies show that it can have deteriorating effects on the brain cells. Some people who may be sensitive to MSG, experience what is known as an MSG symptom complex, characterized by tingling and numbness in the extremities, muscles spasms and headaches.

Instant noodles are also high in sodium, aka salt. A high salt content is directly linked to the development of hypertension and other cardiovascular diseases. Last year, The Washington Post had reported of a South Korean study conducted on the effects of instant noodles on human health. According to the study, “Although instant noodles is a convenient and delicious food, there could be an increased risk for metabolic syndrome given [the food’s] high sodium, unhealthy saturated fat and glycemic loads,” said Hyun Shin, a doctoral candidate at the Harvard School of Public Health and a co-author of the study.

One of the arguments that people give in support of instant noodles is that it is low in calories. What they fail to mention with that is that they are also low in protein and fiber. These noodles are made with processed flour which, in large quantities can cause gastric trouble such as indigestion, but with the low fiber content of the whole meal, you can say hello to your new companion, constipation. Instant noodles are also extremely high is Trans-fat, aka the bad kind of fat. The kind that clogs up your arteries makes your heart weak and gives you chest pain. In summary, although you’re not consuming as many calories you’re sure as heck eating a bucket load of fat.

I would like to conclude by saying hey, look. I get it. We’re busy people who are slaves to society’s expectation and demands of a high functioning life. But if you can’t take some time out for yourself, just enough to eat something healthy, what is even the point? Next time you get hungry and need a quick fix, have a carrot.

9 benefits of strawberry you didn’t know about