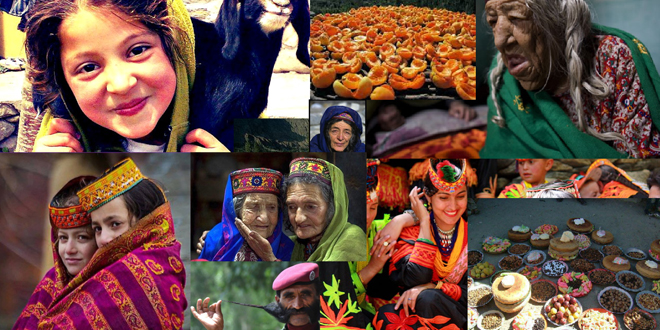 Why the Hunzas are the healthiest people in Pakistan

Almost a month back I wrote about a small incident I faced in Hunza – where I went short of breath, at a certain place where oxygen levels in the air were very low. There I was introduced to the local remedy of eating Apricots to counter such a condition.

Later, in my trip, I met various people, who told me their stories – tourists told me how they had been advised by locals to eat apricot for motion sickness, altitude sickness, and diarrhea or even for instant energy – some tourists, who had been admitted to the medical centers during their trip, informed me that they were given fresh Apricot juice all day long.

Recently, I went through a series of studies and books trying to cover more of the topic, realizing that what the urban plains of Pakistan lack in is actually the secret of the long healthy living of the people of the highlands – their diet, activities and their attitude towards nature.

It is believed that amongst the locals, centenarians are a common occurrence, and that it is not unusual for elderly persons to reach the venerable age of 130. People in the recent past have even lived up to 145 years. Author, Renee Taylor, in her book, Hunza Health Secrets for Long Life and Happiness, writes,

“In Hunza, people manage to live over one hundred years of age in perfect mental and physical health; and men father children at ninety”

Although these people have a Greek background, straight from Alexander, their life expectancy does not have to do anything with the mythical Greek legends, nor are they living in a utopia. They are just common people, the Hunzas (Hoonzas), living at what explorers call the roof of the world – the Himalayan peaks.

The mystery of their exceptional longevity has to do with the thousands of years they had spent in isolation before trade routes connecting the Middle East to China were created – the silk route. In these years they found local remedies for every possible problem of theirs, in a region of just few kilometers. The Hunzas have accomplished to achieve a simple ‘absence of permanent diseases’. Author, Renee Taylor writes,

“Their greatest achievement is the fact that sickness is rare, that cancer, heart disease, heart attacks, high or low blood pressure and childhood diseases are virtually unknown.”

According to one research done by Dr McCarrison on the people of Hunza – just one of the many researches done in the last 100 years – he found that it was the diet that made the Hunzas more superior and medically fit than any other human tribe, even from their neighbors, the Pathans.

Apricots of Hunza Valley are said to be the key behind the absence of tumors. Hunzas eat large amounts of the fruit which is rich in Amygdalin (vitamin B-17). Amygdalin is widely known for its anticancer properties. Apples, pears, peaches, cherries berries and apricot are grown in large and eaten at the same rate – there are more than 50 kinds of Apricots alone in the region.

Once a year for a period of two to four months, Hunzas take a break from their regular diet and solely live on the juice of dried apricots. It is an old tradition that they still follow during the time when apricots are unripe. Scientists agree that it contributes to their amazing health.

The Hunzas use boiled glacier water and tumuru (herb) to make tea which specifically helps them achieve their smooth glowing skin. In some villages, even in the 21st century, Hunzas are reserved to their thousands of years-old culture. Their food consists of raw fruits and vegetables, goat milk products, pulses and grains and occasional meat usually on ceremonies – they normally avoid chicken.

They restrict themselves from consumption of ghee or fats to a very low quantity. The negligible quantities of fats are obtained from apricots and occasional animal meat. The Hunzas, from an ancient time, had been aware of the fact that illnesses comes from ignoring nature – an ancient religious scripture of the Hunzas mention,

“Disease never comes without a cause. The way is prepared, and disease invited, by disregard of the laws of health and of nature.”

We, the people in the urban south of Pakistan, rely heavily on processed food – “manufactured items, which get de-mineralized, de-vitamanized, denatured, pastured, frozen and at times canned are creating problems for own self,” according to Dr Herbert M Sehelton.

At the very same time we have been trying to figure out the best diet for ourselves – choosing a new diet plan at the start of each year, but in reality as Dr McCarrison proves in his historic feeding experiment, on rats, that all we need is chapattis made of whole-meal flour, lightly smeared with fresh butter; sprouted pulse; fresh raw carrots; raw cabbage; un-boiled milk; a small ration of meat with bones once a week, and an abundance of water – the diet of the Hunzas.

The absence of permanent diseases alone is not the accomplishment of the people of Hunza. Another characteristic leading them to such extreme life expectancy is their boundless ‘energy and enthusiasm’. The villagers work hard from dawn to dusk, and unlike us, when it comes to entertainment they do not sit and watch movies or go on long drives, but go for long walks and indulge in sporty activities.

In addition to their daily physical exercise, the Hunzas practice some yoga techniques, particularly breathing; they also give value to other meditations like relaxation from fine arts. They take small but regular intervals of break to relax and gain energy and enthusiasm for their extremely hard routine. We do not realize that our work routines have left almost all of the people in the urban lowlands in a constant state of stress. Whereas, the Hunzas know that they can work much longer if they are not tense, since nervous and muscular tension result in a considerable waste of energy.

In the book, Renee Taylor writes,

“Telling their story, one cannot help but admire the great inner strength which enabled these people to change from warlike creatures to peaceful human beings. Their mind and body must be made pure before it can be directed to higher things. This cannot be bought cheaply – it must come from within. Perhaps one who has it is not conscious of it, but then the tranquility, once we have it, cannot be lost. And this is why the Hunzas were able to conquer anger, hatred, feverish greed and dangerous ambition and establish a perfect balance of body, mind and spirit.”

Tension, stress and conflicting thoughts are unknown to Hunzas. They are completely free of stress-related diseases as they have made themselves fully immune to self-doubt and failures. It won’t be wrong to say that they lead lives like children. Content with their lives, the people of Hunza live in the moment.

There is no juvenile criminal behavior in Hunza, and divorce is a rarity. There are no specific jails or patrolling police, and there is no need for them, as the crime rate is almost negligible – no serious crime by a common citizen has been reported for the last one hundred and thirty years. This makes the Hunzas ‘the happiest people on Earth’, although being the locals of one of the lesser urbanized areas in Pakistan health.

What I have learnt from all the studies and books I went through is that happiness lies within – nature and the law of nature are made to be abided and followed, and the Hunzas personify this idea effectively.