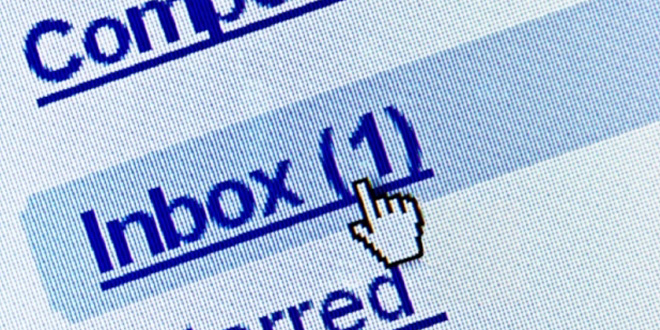 Step away from your inbox if you want to reduce stress

Do you leave your e-mails on all day? Find yourself checking them first thing in the morning? And can’t resist just one more look at your inbox last thing at night?

If so, you may be suffering from e-mail pressure according to a new report from the British Psychological Association, which found that it’s not just the amount of e-mails that we receive that causes us to feel stress, but how we manage them.

Conducted by Future Work Centre, London, the team of researchers surveyed nearly 2,000 UK workers from a variety of industries and across a variety of job roles.

Participants were asked about their experiences using e-mail, with the study wanting to explore whether factors such as technology, behavior, and personality influenced how much pressure they felt because of e-mail messages.

The study showed that 62% of those surveyed left their emails on all day, and nearly 50% of those surveyed had their e-mails sent to their inbox automatically, known as push notifications. And rather than getting organized and reducing stress, checking e-mails first thing in the morning and last thing at night actually had the opposite effect, with this habit linked to higher levels of stress and pressure.

Although acknowledging the value of e-mail as a communication tool, Dr Richard MacKinnon commented that emails are a source of stress for many, “the habits we develop, the emotional reactions we have to messages and the unwritten organizational etiquette around e-mail, combine into a toxic source of stress which could be negatively impacting our productivity and wellbeing.”

The report also found that it is those who report e-mails as being most useful to them that also report the highest levels of e-mail pressure, and could benefit the most from taking a step back from their inbox.

Although there are ways to reduce this stress, Mackinnon cautioned that a one-size-fits-all approach is ineffective, as people are different not only in how they perceive stress, but also in how, where, and when they work, with different industries also reporting different levels of e-mail pressure.

However he does suggest taking the following measures in an attempt to reduce feelings of email pressure:

– Before checking emails early in the morning or late night ask yourself, do you really need to check your e-mail? Try putting your phone away and resist the urge to look at that laptop again.

– Get organized and plan your day and your work priorities before emails with new priorities flood your inbox.

– Try turning off push notifications and at times, even turning off your e-mail app to help you take control of when you receive e-mail.

The findings will be presented on Jan 7 by Dr MacKinnon from the Future Work Centre at the British Psychological Society’s Division of Occupational Psychology annual conference in Nottingham.

In a previous 2014 study a team of researchers from the University of British Columbia’s Department of Psychology found that people felt less stress when they checked their e-mails less often.

However despite the health benefit of not looking at your inbox so often, the study’s results showed that resisting the temptation to do so was not quite so easy.