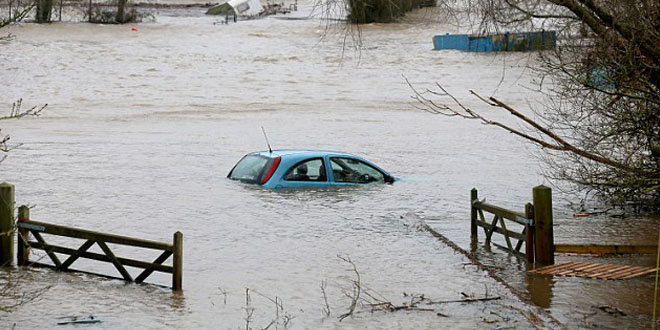 Some extreme weather made worse by climate change: Study

A killer snowstorm in the Himalayas, a scorching heat wave in Argentina and lashing rainfall in southern France last year were all made worse by climate change, international scientists said Thursday.

But other major events, like Hurricane Gonzalo over Europe and drought in Brazil were not influenced by global warming, according to the peer-reviewed study called “Explaining Extreme Events of 2014 from a Climate Perspective.”

The scientific team included 32 research groups from around the world, analyzing 28 different storms, droughts, fires and floods in an effort to showcase the role of human-driven climate change and land development on extreme weather.

But with rain and snowfall, scientists reported “a much more mixed result when it comes to looking for the human influence,” she told reporters, describing the findings as “pretty evenly split this year between those that did and did not find a signal.”

Rather, scientists contributed research based on extreme weather events they were interested in studying, often but not always in their home nations, Herring said, noting that scientists were not offered funding or incentives by NOAA for their work.

Weather events involving heat were most likely to have a clear signal that climate change played a factor, with such influence detectable about 95 percent of the time, the report found.

Those involving precipitation were less certain, with human-driven climate change or other land use activities showing up about 40 percent of the time.

“Climate change is happening. It is having impacts,” said Herring.

“Is it having impact uniformly across the globe in everything that we see and do? At this point, not in a measurable way.”

For the purposes of the study, human influence could include the burning of fossil fuels which drives global warming, or the development of land, or changes to water use that can make droughts, floods and wildfires more devastating.

Among the findings, tropical cyclones in Hawaii were “substantially more likely because of human-induced climate change,” said the report.

Both climate change and land-use played a role in the flooding in the southeastern Canadian prairies, it said.

In southern France, extreme rainfall in the Cevennes Mountains was three times more likely than in 1950 due to climate change.

The Argentinean heat wave of December 2013 was made five times more likely because of human-induced climate change.

When analyzing the drought in East Africa, two studies showed that the situation was made more severe because of climate change.

Global warming and human influences are also making floods like the ones that struck Jakarta last year more likely, as well as the extreme Himalayan snowstorm of 2014 that killed more than 40 people in Nepal.

In Australia, human influence was blamed for “causing a substantial increase in the likelihood and severity of heat waves.”

Among the events that were not found to have been influenced by humans was the extreme 2013-14 winter storm season over much of North America, which was “driven mainly by natural variability and not human caused climate change,” said the report.

Nor could an all-time record number of storms over the British Isles, extreme rains in the United Kingdom, Hurricane Gonzalo in Europe or drought in northeastern Asia, China and Singapore be attributed to climate change.

Findings on the Middle East drought were in conflict, with one study showing a role for climate change in Syria, while another study involving the entire region did not find a climate change influence.

Researchers said they hoped their work would help inform leaders and planners who want to protect their populations against the harms of extreme weather.

“Some of these events are climate surprises,” said Marty Hoerling, a report co-editor from NOAA’s Earth System Research Laboratory.

“And we should be prepared to be better equipped to deal with such surprises.”

Climate change and us