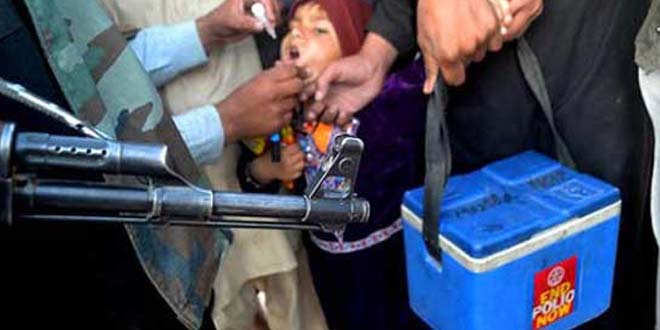 Polio eradication campaign was suspended in 18 union councils of Quetta on Thursday due to lack of security provided to polio teams. Sources in the health department of Balochistan have said that the drive would re-launch on Friday.

Polio teams have been attacked in various parts of Balochistan including Quetta in the past. Pakistan’s fight against polio has in recent times been marred by militants who targeted vaccination teams, especially in the northern and tribal belt where they have carved out hideouts for themselves.

Four polio workers including three women volunteers were killed in November 2014 when gunman attacked a polio eradication team in Quetta.

The Pakistan Taliban is on record having said that it will target vaccinators everywhere — and they have done so in many parts of the country. They have roots within certain highly conservative communities, which is of significance in the context of battling polio.

This specific polio campaign was launched in 18 union councils on Wednesday morning; this was its first phase. The second phase had to be launched on May 25. Currently the campaign is underway in 8 districts of Balochistan including Zhob, Sherani and Lasbella.

The campaign was earlier scheduled to launch on last Monday but was postponed due to the protest of vaccination volunteers. They demanded that all due payments be made clear before further work. They claimed that provincial health department was using delaying tactics as far as their payments are concerned.

The health department in Balochistan is working with international health organizations and had planned to administer polio drops to more than 400,000 children of less than 5 years of age in Quetta. In total 1.2 million children have been targeted in the 8 districts.

So far in 2015 three polio cases have been reported in Balochistan and the provincial government has already declared emergency to eradicate the disease from the province.

Pakistan now stands as the major barrier to the global elimination of the wild polio virus. The other two countries Nigeria and Afghanistan with recent cases of this crippling disease seem to be winning the battle, as in both countries no polio case has been reported this year.