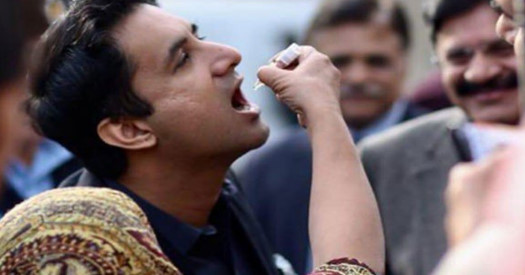 In case you didn’t know, Pakistan is one of the three remaining countries in the world where poliomyelitis is still categorized as an endemic viral infection, while the other two countries are Afghanistan and Nigeria. As of October 2015, there have been 38 documented cases of wild poliovirus in Pakistan in the past year.

According to a report published in Dawn, recently two cases were confirmed by The National Emergency Operations Centre (EOC) for polio eradication. The two cases were from Gadap area in Karachi and from Khyber tribal district in Khyber Pakhtunkhwa — bringing the total number of polio cases in the country to six this year, however, the virus failed to cause any clinical paralysis to both the children.

The Islamabad deputy commissioner, Hamza Shafqaat, took polio drops on Thursday to allay a citizen’s concern who did not want to have his children vaccinated.

According to details, the deputy commissioner asked one of the volunteers to administer him polio drops after a reluctant citizen refused to have his children vaccinated by the team during an anti-polio drive.

After seeing the deputy commissioner consume the polio drops, the citizen’s concerns were put to rest and he allowed his children to be vaccinated.

Many in Pakistan are reluctant of polio drops and often turn away volunteers who want to vaccinate children to save them from the crippling disease.

Last month, two polio viruses were detected in Khyber Pakhtunkhwa’s district Khyber and Karachi. This brought the total number of polio cases detected to six in 2018.

The drive suffered a setback in September when parents of 2,800 children in Rawalpindi refused polio vaccination for their kids.

Many polio workers in Pakistan have also lost their lives in the past couple of years in their bid to rid children of the crippling disease.