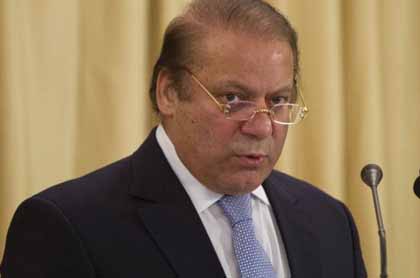 PM Nawaz Sharif has strictly ordered to give polio health workers maximum security. During a meeting at the Health Department, PM Nawaz was briefed about the polio action plan. He said, no negligence in this regard will be endured. He further emphasized, we want a polio free Pakistan where not even a single child is prey to polio.

Pakistan’s current year has been facing deep trouble in its polio campaigns across the country. At one side, terror attacks create a wave of dismay due to which health workers deny working any further while the on other side, uncertainty of vaccine formula is still a jargon for tribal as well as cosmopolitan citizens. Many parents and elders of their children think that polio vaccine contains poisonous contents and it could harm their progeny. PM Nawaz Sharif stressed on the need of civil-military coordination mechanism to score out polio. National Anti-polio Task Force meeting was held in Islamabad where PM chaired the meeting. He said, civil-military mechanism can be helpful across the country. Governor KPK engineer Shoukatullah, CM KPK Pervez Khatak, CM Sindh Syed Qaim Ali Shah, and PM Azad Kashmir Chuhadary Abdul Majeed were also present in the meeting. Ministry of National Health gave details briefing about PM National Polio Emergency Action Plan and Balochistan where no single case of polio has been reported yet. CM Sindh Syed Qaim Ali Shah informed PM Nawaz Sharif about Gadap Town Karachi where polio health workers are dissatisfied from terrorist attacks. He further said the new strategy has been developed in Sindh.