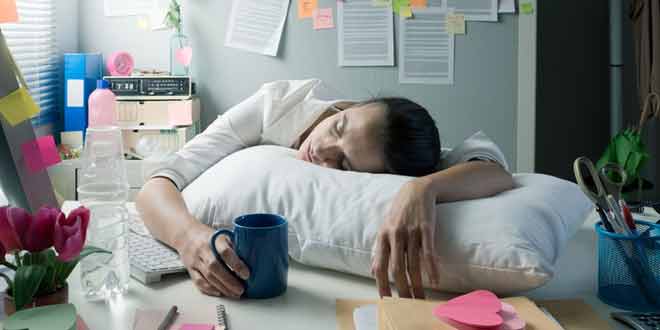 Not getting enough sleep can make you fat

Getting enough sleep is essential to successful weight loss. Sleep is often overlooked by dieters, but a wealth of scientific research supports the theory that people who get little rest are at increased risk of being overweight or obese.

As a knock-on effect, poor sleep can lead people to be less active and snack more, often reaching for sugary or fatty foods as a pick-me-up.

Here are a few tips from the doctor and nutritionist Laurence Plumey to improve the chances of successful weight loss.

Get at least 7 hours’ sleep per night

A recently published study found that missing out on full nights of rest, of at least seven hours, was linked to an increased consumption of sugary drinks and foods, as well as a higher risk of obesity. It’s important to listen to the body’s cues and head to bed with the first yawn of the evening, recommends Laurence Plumey. There’s no shame in going to bed at 10:30pm, she continues, otherwise you risk losing out on 1½ hours of rest before the next cycle.

Still, some people naturally need more sleep than others, and this genetic trait should be taken into account. As the specialist explains, if you wake up on great form after five hours’ sleep, then maybe you’re someone who just doesn’t need much shut-eye.

Make the most of natural daylight

It isn’t always widely known, but spending days in rooms with low lighting levels and doing activities under artificial light dips into the body’s reserves of melatonin, a hormone that allows the onset of sleep. Preventing this process during the day causes the body to secrete of higher levels of melatonin in the evening, which can favour refreshing, quality sleep. Detrimental light from screens can be toned down in the evenings by downloading a free programme like F.lux, giving the light a yellow tinge for a softer effect.

Getting up at midday on Saturday and Sunday sets our regular food intake off balance. It’s better to take 20-minute naps during the day to avoid breaking the weekday routine entirely. This can also make the sound of the Monday morning alarm a whole lot less painful.

Anything that contains caffeine, such as coffee, tea, energy drinks, soft drinks and chocolate, should be avoided in the evening. Caffeine stimulates the nervous system and alters the activity of melatonin and adenosine, two neurotransmitters essential to the onset of sleep.

Physical activity promotes sleep and burns calories. Here too, it’s important to listen to the body, as different people enjoy exercise at different times of day. Some find that exercise winds them down ready for bed, while others ride high on the effects of dopamine for an energizing start the day.

In large quantities, fats, like sugars, slow down digestion and increase body temperature. Deep sleep, however, is favoured by reducing body temperature. With sugar and fat, you lose out on two levels, explains Laurence Plumey, with a negative effect on sleep and calories stored during the night. A third knock-on effect is that hunger is often curbed at breakfast time, making fatty or sugary foods popular options for late morning snacks, the expert said.

Alcohol can be detrimental to both sleep and weight loss! It may help induce sleep initially, but the transition to a deep rest phase is slowed down. In fact, alcohol is thought to prevent the secretion of adrenaline (the stress hormone) and disturb the activity of tryptophan and serotonin, two neurotransmitters that regulate sleep.