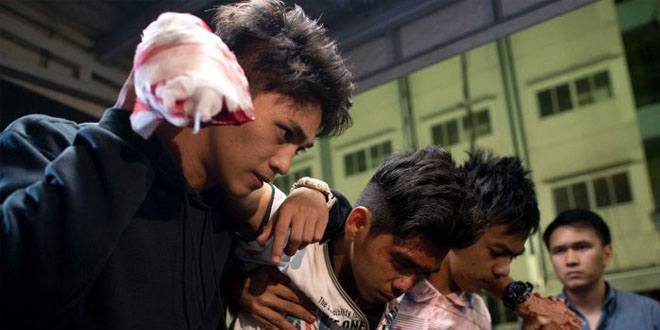 A drunk man died after he embraced a giant firecracker called Goodbye Philippines as it was about to explode, health secretary Janet Garin told reporters.

“His jaw was shattered. He was so intoxicated he hugged the Goodbye Philippines,” Ms Garin said, adding the man was pronounced dead at the hospital.

Revellers set off firecrackers and shoot guns into the air to celebrate the December festive season.

The health department listed 380 injuries due to fireworks and four others due to stray bullets.

In many hospitals across the country, firecracker victims rushed into emergency rooms grimacing in pain as they held their bloodied limbs.

An eight-year-old boy in the northern farming province of Nueva Vizcaya had three of his fingers amputated after a firecracker exploded in his hands, Ms Garin said.

At least nine children had their fingers amputated due to firecracker injuries, she said.

Panicked and weeping residents fled their burning homes carrying clothes and furniture while men, many of whom were drunk from a night of merrymaking, desperately tried to put out the fire with buckets of water.

A 65-year-old woman died from a heart attack as she watched her house burn, Mr Yu said.

Many Filipino civilians keep licensed guns in their homes to protect themselves in a high-crime society and most firecrackers are legal and easily available.

4 things people plan to do this New Year’s Eve