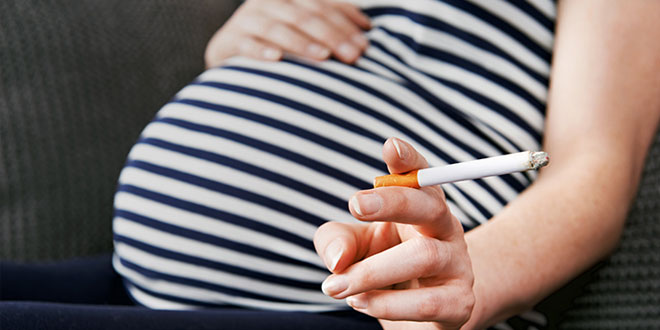 A new study on animals led by the University of Yale has found that smoking while pregnant can cause genetic changes in children that can affect health long after birth.

The team believes the results help to explain why maternal smoking has previously been linked with behavioral changes such as attention deficit disorder, hyperactivity disorder, conduct disorder, and addiction.

For this new study the team of researchers looked at lab mice exposed to nicotine during their early development.

They found that the mice developed behavioral problems and showed the same symptoms as those seen with attention deficit disorder in humans.

The team then looked at the genetic makeup of the mice and found higher levels of activity in a key regulator of histone methylation — a process that controls which genes are expressed by changing the DNA wrapped around chromosomes. The team also found that the genes that are essential to the creation of brain synapses were heavily affected, altering the formation of connections between brain cells.

“When this regulator is induced in mice, they pay attention to a stimulus they should ignore,’’ commented Marina Picciotto, senior author of the paper.

This inability to focus is a key symptom of behavioral disorders already linked to maternal smoking and exposure to second-hand smoke such as attention deficit hyperactivity disorder.

These genetic changes in the mice also continued into adulthood, suggesting maternal smoking could have long-term health effects.

However, when researchers decreased the level of the key regulator of histone methylation, the adult mice became calmer and creased to react to a stimulus they should ignore.

And in a final experiment, when the team increased the levels of the key regulator in mice who had never been exposed to nicotine, they still showed the symptoms and behavior mimicking add as seen in the mice exposed to maternal smoking.

Picciotto said, “It is exciting to find a signal that could explain the long-lasting effects of nicotine on brain cell structure and behavior. It was even more intriguing to find a regulator of gene expression that responds to a stimulus like nicotine and may change synapse and brain activity during development.”

The results were published online in the journal Nature Neuroscience.

A major meta-analysis published earlier this year also found that maternal smoking could alter DNA in fetuses. After looking at 6685 babies the team found that in the newborns of mothers who had smoked while pregnant there were “6,073 places where the DNA was chemically modified differently” than in the newborns of non-smoking mothers.

A separate analysis by the team on hundreds of older children with an average of six also showed that some of these DNA modifications still remained in children whose mothers had smoked while pregnant.

Doctors have long warned women to avoid cigarettes while pregnant as smoking can also lead to stillbirth, lung disease, neurobehavioral problems, and born with cleft palate.

What Your Birthstone Says about You?

Talking to Your Baby from Birth can Make them Smarter

Causes of Premature Birth Every Mother should Know