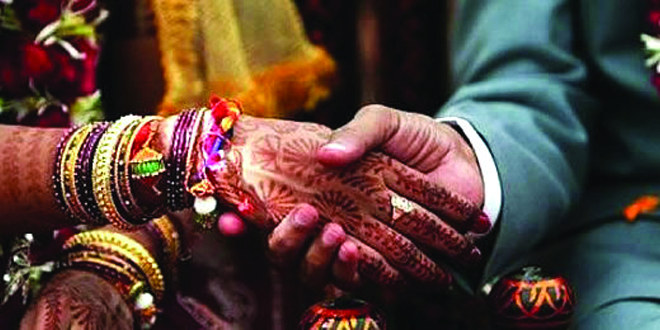 Marriage is a universal practice in which a bond is formed between two individuals that is social, emotional, cultural, physical, and religious in nature. This marital union lays the foundation for the most basic social institution, the ‘family’ that is designed to rear the next generation with comfort.

Several factors are considered in choosing close or distant relations to form this union.

‘Consanguinity’, the term for cousin marriage (CM) or inter-familial marriages between close relatives, is derived from the Latin words, con – “shared” and sanguis – “blood”.  In such marriages, each partner shares genes of a common ancestor such as a grandparent. The practice is prevalent in South Asia and Middle East countries with rates exceeding 40% of all marriages.

It is important to discuss CM in the Pakistani context. Hafeez (2014) reported that around 82.5% Pakistani parents are blood relatives from first, second or third generations. Of these 13% are CMs and close relatives. In Pakistani culture CM is common, legal and even a respectable practice due to socio-cultural and economic reasons.

People accept CM being unaware of its associated health risks to their offspring and consequent hospitalizations, and serious psychological, social and financial hardship that may follow.  A study reported that Pakistani respondents did not accept the connection between CM and poor birth outcomes. The disabilities were attributed with the destiny and “will of God”.  This article will analyze the issue of CM; describe its causes, consequences, and recommendation using Leininger’s sunrise model.

The sunrise model describes the socio-cultural, economic, religious, educational and political factors that may influence a person’s health. All these factors leading to CM can be found in Pakistan and affect the health of the progeny of a CM couple. Firstly, families think that husband and wife will easily adjust due to familiar relationships; it is considered a means of promoting family ties and transmission of cultural values in the next generation. Moreover, the wife is more likely to be supported by her in-laws in times of need.

Secondly, financial issues, marriage arrangements are made easier to handle, and property is retained in the family. Thirdly, it is thought to be a protective factor against divorce. In Pakistan CM is generally observed in extended families, people of low socioeconomic status, rural background, and low levels of parental education.

Additionally, marrying in kin is also considered a part of faith in some religions found in Pakistan. CM is also seen as a way of settling abroad, in developed countries. As Shaw (2014) found, Pakistani families who lived in UK used CM to help their relatives to enjoy the benefits of education, occupation and good living standards because they were committed to their kin living in Pakistan.

It is important to understand that culture and health are interrelated; cultural norms can highly influence a person’s health, behavior and decision making and ultimately determines health outcomes. Studies suggest that CM may have genetically detrimental effects. The mating of genetically related individuals contributes to the transmission of genetic material that is similar in nature and may carry disease traits.  It allows less common alleles with recessive traits to become phenotypically expressed.

A study conducted by Zakar, Zakar and Aqil (2014) indicated a strong relationship between first-degree consanguinity and the risk of small size birth and neonatal death. Furthermore, congenital anomalies, and autosomal recessive disorders such as thalassemia, cystic fibrosis, atrial and ventricular septal defects, cleft lip or palate run in families due to CM.

Moreover, CM was not found to protect women from any form of abuse: sexual, physical or psychological. This violates several human rights including a right to respect, freedom of choice and expression.

Leininger (2002) suggested three transcultural care decisions and actions: cultural preservation, negotiation, and restructuring. In tackling the CM issue, negotiation and restructuring can be done at the individual, family and community level, using platforms such as Pakistan health centers, religious centers, guiding units, and schools to educate people on effects of CM.

A health care professional should be non-judgmental and avoid imposition of his/her own values on others while providing information about CM and its risks. However, restructuring of harmful practice regarding CM in Pakistani society will be based on the scientific facts. People should be informed that the law in many countries does not allow cousin marriages. This law can be adopted in Pakistan; however it is difficult to eradicate this ancient custom completely from the society.

People refrain from going through the process of premarital screening as they believe that they do not have any disease. Therefore clarifying such myths is necessary to preserve health of offspring.  Since Pakistan is predominantly a Muslim country, a hadith related to CM can be used to restructure cultural norms. This hadith encourages marriage outside the kin as Hazrat Muhammad (PBUH) stated that CM causes weakness in off spring.

In case of already present CM, genetic screening can still be suggested to couples while planning for the next pregnancy.  If the mother is pregnant, identifying CM through history is important. In the case of CM and existing pregnancy, the mother should be asked to have timely screening for fetal congenital defects through Alpha Fetoprotein blood test, ultrasound and other recommended tests.  If positive for these tests, she should be given the choice of legal therapeutic abortion.

Moreover, suggesting effective family planning methods such as intrauterine devices, hormonal injection and pills can be recommended (International Planned Parenthood Federation, 2015). Adoption is another option, which is also a common cultural practice in Pakistani extended families.

Hence, to prevent the negative consequences of CM, health professionals, community workers, schools and non-governmental health agencies in Pakistan can take an active role in educating the public about the implications of CM. In addition, appropriate health policies can be developed so as to avoid poor health outcomes associated with CM.

About the author: Azaina Aijaz is a Year III BScN student at the Aga Khan University, School of Nursing and Midwifery, Pakistan. She has been a recipient of merit scholarship for two consecutive years and expecting to get scholarship for Year III. She is also a member of Sigma Theta Tau International – Honor Society of Nursing, Indianapolis, USA.

No Link Between ‘the Pill’ and Birth Defects