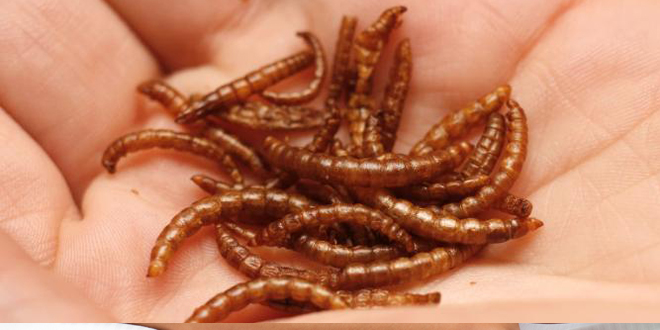 Breed-your-own insect ‘revolution’ for the kitchen

A seething mass of larvae in the kitchen is not everyone’s cup of tea, particularly for squeamish Westerners. But for two young Austrian entrepreneurs, it’s a food revolution that can help save the planet.

Katharina Unger and Julia Kaisinger, 25 and 28, have developed a device to breed in the comfort of your own home the protein-rich grubs of the meal beetle, to then eat.

“With this current design you can make 200-500 grams (seven to 18 ounces) of mealworms every week,” Unger told AFP at a recent tasting and fundraising event in Vienna.

“You freeze them and then you make them like any other type of meat. You can cook them, roast them, make them into burger patties and mix them into sauce for pasta,” she said.

Into the top of the sleek, white “desktop hive” go pupae which then hatch into adults. In the next section, the “loveshack”, the insects mate and their eggs fall into the next layer.

Helped by a controlled microclimate, the eggs hatch into larvae which gradually grow and descend to a drawer at the bottom where, around three centimeters (an inch) long and plump, they are “harvested”.

“Our team eats them almost every day,” Unger said, showing off some of her creations — Greek salads topped by toasted grubs, quinoa-and-mealworm meatballs and even chocolate (and worm) cake.

Eating insects — entomophagy — is not new. Humans have been doing so for thousands of years and today they are a common food in many developing countries across Asia, Africa, Latin America and Oceania.

The UN Food and Agriculture Organization (FAO) estimates that insects form part of the traditional diets of at least two billion people, with more than 1,900 species reportedly enjoyed worldwide.

In Europe, Romans and ancient Greeks ate them — Aristotle was partial to cicada larvae — and some European cheeses, like mimolette in France or the Sardinian casu marzu, contain or use insects.

A few insect restaurants have sprung up in Europe and North America in recent years, and some products, ranging from salt-and-vinegar crickets to lollipops with scorpions (actually arachnids), are available.

But for the most part, Westerners generally see bugs as a nuisance, not as nutrition.

This is a shame, Unger said, since insects are not only tasty but a more sustainable source of protein than traditional farmed livestock — and are vital to feeding the world’s growing population.

“Compared to beef you need only 10 percent of the land to grow mealworms and you need only around a quarter of the feed that it typically takes to grow the equivalent amount of beef,” she said.

Indeed a 2013 by the FAO noted the “huge potential” of insects, not only for feeding people but also livestock, although it cautioned more research was needed.

The mealworms are also nutritious, containing the same amount of protein as beef, more vitamin B12 than eggs and more fibre than broccoli, according to Unger and Kaisinger’s firm, Livin Farms.

Alexandra Palla, a well-known Austrian food blogger present at the recent tasting event, plans to post a recipe of risotto with mealworm, calling the taste “nutty, or mushroomy”, but “not spectacular”.

But she said that it will take some time for people in Europe to get over the “yuck” factor and really embrace creepy-crawlies as food.

“The first step is mentally to get over the fact that you are eating an insect. Once you eat them you realise they’re not so bad,” she told AFP. “It’s about getting rid of the fear.”

“I think in the future everyone will eat insects, or at least almost everybody,” predicted Kaisinger, the co-founder of Livin Farms, which already has 200 pre-orders for its $499 (459 euros) hives.

“People actually consume around half a kilo (about a pound) of insects every year without knowing it, from tiny traces in chocolate to orange juice and the like.”