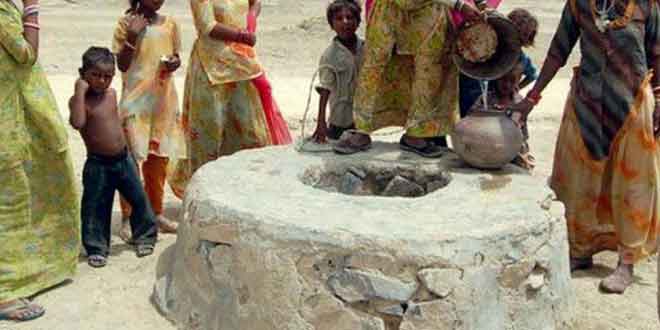 3 more children have died on 18th March 2015, due to the continuous drought in Tharparker. The total death toll of children has risen to 30 in the month of March. On the other hand, the Sindh government has suspended the relief activities to the victims of Thar.

All three children were admitted to Civil Hospital Mithi, where they lost their life. Children in the area are suffering from diseases such as Diarrhea or Pneumonia due to a mix of factors: poverty, poor health facilities and drought.

The arid region of Sindh has been facing severe droughts since the last two years. The area is continuously facing food shortage and causing malnutrition; malnutrition in mothers is causing deficiencies and diseases in newborns.

Thar has a similar climatic condition as of Indian Rajasthan, but faces severe drought in every two to three years within a ten year cycle. The average rainfall is less than 250mm which is usually un-periodic. The northern Thar, parts of Ghotkhi, Sukkur and Sanghar receives an annual rainfall of less than 7 inches, but even than it has reasonable vegetation.

Attention from the government can solve the issues of the region as Thar, unlike other deserts is potentially productive and capable of plantation though it has fragile ecosystem. The over exploitation of land has turned Thar into a desert.

A realistic approach is needed to get Thar out of the state of disaster. Cholistan and the Indian Rajasthan are examples of development and management. The canal irrigation of Cholistan and India’s research in Rajasthan has made these areas self-sufficient.

The authorities working under the provincial government such as SAZDA (1985-2003) wasted most of its resources on civil work and not on crucial development schemes such as livestock development and desertification control.

It had been seen in the past that either doctors or appropriate medical facilities were not available in government medical camps and major hospitals including the Mithi Central hospital. It was discovered in the end of 2014 that 18 medical centers only in Umerkot district were non-functional.

Earlier the Supreme Court took a ‘suo moto’ notice of the situation in Thar. It was reported that most of the Deaths in Tharparker occurred due to unhygienic methods of delivery and diseases like pneumonia and asphyxia. The court declared the Sindh government responsible for whatever happened in Tharparker district. The Chief Justice while giving his remarks praised the media for its role in highlighting the issue.

Umerkot district and sessions judge Suresh Kumar submitted a report to SHC after conducting an enquiry where he pointed out that several posts of doctors, civil surgeons, gynecologists, pediatricians and other medical specialists were lying vacant in Umerkot. He added that in his visit to DHQ Umerkot along with other judges he found that 23 children were under treatment at the hospital but there was no pediatrician posted in the hospital. He added that equipment such as X-Ray machines were not operational since the last two years and medicines provided at the hospital were of low quality.

Though the current provincial government of PPP has started various programs to help the drought hit people of Thar and control rate of child Deaths in Tharparker there. One of these programs is The Benazir Income Support Program (BISP).

Much of these programs have failed, due to corruption and lack of honesty and commitment, but the current chairperson of Benazir Income Support Program, Marvi Memon (MNA) has said that a three point formula would be implemented and the program would be run transparently and fairly.

Other than the support programs, the provincial government has announced to invest rupees 5.4 billion in installing 750 solar powered reverse osmosis water purification plants across the desert region to get safe water to the population. The government of Sindh expects all facilities to be set up and running by June 2015.