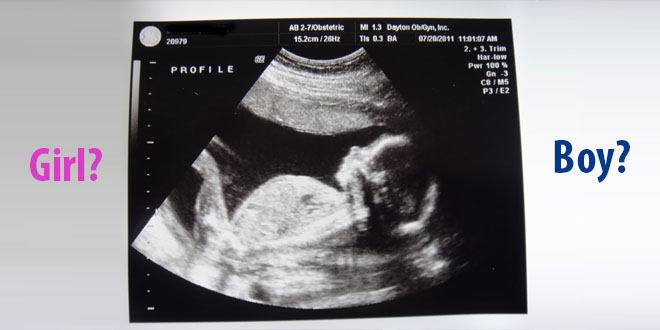 Pregnancy is one of the most pleasant and emotional experiences of a woman’s life. The step by step fetal development increases the sense of responsibility and maternal feelings.

During pregnancy, a woman undergoes various procedures of laboratory and diagnostic test such as ultrasound. Ultrasound is one of the tests used to gain information about development and growth of babies in the womb. The purpose of this test is to pursue any abnormalities or malformation of the fetus such as spinal bifida, multiple fetuses etc. However, findings of this test have been abused by many parents and they utilize this procedure as a source of gender identification.

We live in a society where male birth is given more attention than female and many times when parents come to know that they will have a girl child, they often abort her. A similar concept has been described by Sinha.

“The arrival of ultrasound machines, and its subsequent exploitation, ushered in a silent era of organized crime. Now able to identify the sex of fetus early in pregnancy, parents who learn their child is a girl often abort her.”

Therefore, it is my contention that baby gender should not be disclosed during ultrasound because it promotes the environment of maternal depression, negative family dynamic and abortions.

Firstly, I argue that a mother should not be informed about the baby’s gender during ultrasound as it promotes the environment of maternal depression. Pregnancy is the time to develop internal mother-child bonding. During this unique experience, the mother is physically and emotionally attached with her baby in the womb and develops a strong tie of emotion but by disclosing the gender we bring emotional disturbances to both of them.

Many of the cultures and traditions consider woman responsible for the birth of a girl child and traditional practices still pressurize women to have a male child; therefore, by uncovering the news of gender during ultrasounds, one could put the mother into severe depression. As Solchany (2007) states,

“Prenatal depression does not act alone—anxiety and stress also have an Impact. In fact, depression, anxiety, and stress act as a trilogy of risks that can negatively affect both mother and child.”

However, proponents of gender disclosure believe that by holding information, we violate the patient’s autonomy, therefore, we should inform prior so she can prepare herself for the upcoming child. They argue that the woman should have enough freedom to take decisions of her reproductive choices and selection of baby gender accordingly. Purdy (2005) adds,

“By reproductive autonomy, I mean the power to decide when, if at all, to have children; also, many — but not all — of the choices relevant to reproduction.”

Regardless of reproductive autonomy I believe that by hiding the information of gender, we are transforming the benefits to the mother to have a healthy child. Pregnancy is a natural surprise thus no single argument of reproductive freedom can justify with the mother’s and child’s health. As Malone (2006) states,

“I don’t consider reproductive liberties more important than the wellbeing of children.”

Therefore this information should remain intact and more focus should be given on saving the mother and child’s health, rather than gender identification.

Secondly, I argue that baby’s gender should not be revealed to pregnant women during ultrasound because it brings about a negative family dynamic that leads to gender discrimination within the family.

The society in which we live highly stigmatizes a female child and the roots for this stigma may belong to dominancy of patriarchy or absence of an heir (which is not the case with a male child). In a patriarchal family, males are considered more important because of succeeding the family name. These discriminations often end up in the form of domestic violence, separation or termination of pregnancy.

With my own experience of community life, I once came across a woman who was abused and violated by her in-laws after it was revealed that the child in her womb was a female and she eventually had to terminate her pregnancy due to severe pressure.

“One-third of women described past physical abuse and neglect related specifically to their failing to produce a male child.”

But on the other hand, proponents argue that similar discrimination can occur after the birth of the child, so hiding information will not improve the situation but by prior disclosure of gender, it will help parents to develop family balancing and bring positive family dynamics. According to Grady (2007),

“Some people say sex selection is ethical if parents already have one or more boys and now want a girl, or vice versa. In that case, it is ‘family balancing’ not ‘sex discrimination’.”

Despite these arguments, I believe that family balancing is truly unfair with the unborn baby and mother. Although the discriminative behavior within the family may take long time to resolve but by hiding information we ensure women to have peaceful journey of pregnancy.

Finally, I argue that information regarding sex should not be given out because parents (usually the father) end up opting for abortion due to his own gender preference. This in turn increases the abortion rate. Grimes et al (2006) state,

“Worldwide estimates for 1995 indicated about 26 million legal and 20 million illegal abortions took place every year. Almost all unsafe abortions (97%) are in developing countries, and over half (55%) are in Asia…”

Sex selective abortion is against human dignity and violation of natural law. The unborn baby should have complete rights to live and explore the world. However, proponents feel that abortion helps parents to avoid the unwanted babies and enables family to plan the future. According to Lott and Whitely (2001),

“Abortion may have prevented “unwanted” children from being born. These unwanted children might, if born [have been] more prone to end up in trouble when they grew older.”

Instead of these arguments, I strongly believe that sex selective abortion is clear discrimination. It is injustice with the society by creating a sex-imbalance ratio and killing of particular child on the basis of sex.

It is very necessary that ultrasound technology during pregnancy should be used for the therapeutic purposes rather than gender disclosure.

6 Pregnancy Conditions That Can Be a False Alarm

Causes of Premature Birth Every Mother should Know