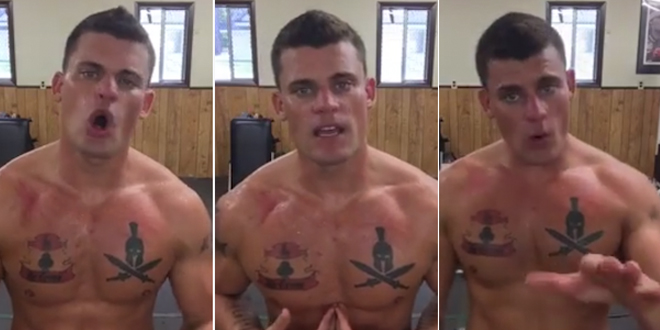 In recent years, the social media has highlighted many issues pertaining to body-image and body shaming. Many news organizations have run videos and articles that talk about what the perfect body is and whether we should embrace the body type we have or not.

In fact, only a couple of weeks back, I too wrote an article about how women in Pakistan should view their bodies with their own perspective and do and wear whatever they feel looks good on them.

But, today, I watched a video which enraged me so much that I just had to pen this piece down.

An American army veteran named John Burk, who considers himself to be the ultimate “fitness motivator”, made a video for his social media page to propagate his fitness regime, and during the video described overweight people as “utterly repulsive and disgusting”.

I saw this video a couple of times to grasp exactly what I was seeing. I couldn’t bring myself to believe that there are still people in this world who can be so hate-filled and uncouth. My first and foremost question to this man is how dare he shame an entire group of people by labeling them disgusting?

Who gave him the right to comment on other people’s bodies?

The irony was that the video talked about how we should stand in the face of bullying and never let a bully win. But isn’t that exactly what Burk was doing – bulling fat people with his own notions of the perfect body?

Surprisingly, this video has garnered varied responses. While most people have reprimanded him for his careless comments, there were some people who were ‘inspired’ by his crass statements and abusive language and thought that he was right in his stance. But this is what made me truly abashed; how could anyone be inspired by this man?

I understand that, yes, some people are lazy and many choose to have a lesser-than-ideal lifestyle, but that doesn’t give some tom, dick and harry the right to make such a repulsive video and harass people like this. This video comes under the tenants of cyber-bullying and this man should be banned from the internet for it.

People need to be made aware of being healthy and eating right in a manner that would actually make some sense to them, instead of bombarding them like you’re in some combat military training. If I were told to lose my weight like this by someone, instead to listening to the advice, I would probably slap them first and then stick to my unhealthy ways out of stubbornness.

Regardless of what wrong people are doing by not staying fit and healthy, motivating them as if you are talking to a soldier is utter nonsense to me.

Get your act straight, Burk. If you wish to be a motivation to someone, first and foremost stop insulting them. This does not pump up anyone; in fact, it lowers their self-esteem.

If you are overweight, you cannot fly with this airline