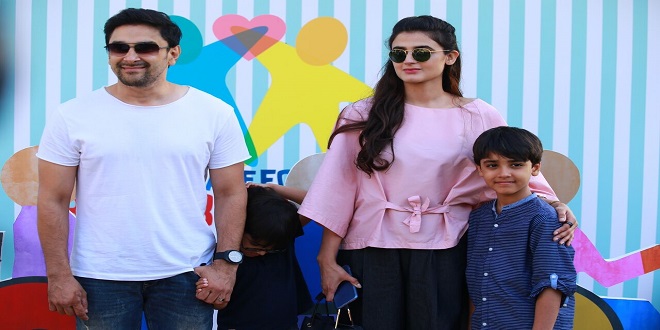 Race organized for differently-abled kids to encourage inclusion in playgrounds

Children are a beautiful creation of God. Different children are born with completely divergent abilities and a set of talent. Among these also exists a cast of children that are completely unlike from the normal condition and state of mind generally known to the world at large as ‘Special Children’ and these children need extreme attentiveness and concentration at every end. In lieu of this, Blue Band has taken a bold initiative and stared its campaign named ‘Acchai Barhnay Do’ this year with the objective of creating an all-encompassing environment for such teenagers throughout Pakistan with an aim to bolster their inclusions in the co-curricular activities.

Blue Band is considered as one of the leading spreads brand of the country relished all over the society since decades. This edible consists of enormous fats and vitamins that help children (bache) to grow and further develop up to the maximum. Need to embolden special children by inclusion in playgrounds

Recently, Blue Band has joined hands with Special Olympics Pakistan and successfully organized an event ‘Both Buddy and Me’ race at a local hotel in Karachi.The race was conducted at Pakistan’s largest hot-air balloon race course where normal teen-agers were paired up as a partner with differently abled kids in order to finish the entire race together as a team. This supreme initiative has provoked an undying confidence in the disabled kids with an aim to reduce all such barriers that special children mainly witnesses during participating in recreational activities. By means of such race disabled kids got highly motivated that they can easily and without any reluctance display their skills in multi-tasking sports too.

The ultimate objective of Blue Band behind this race was to educate the parents / guardians the immense importance of social inclusion that is needed for such kids andeliminatingall obstructions and constant fear from the mindset ofthese differently-abled kids. Yes, with the end of this race, the desired objective was attained as it proved fruitful in all aspects especially in reinvigorating the level of energy among kids to participate in all walks of life. Director Foods & Refreshment Unilever, Farheen Salman expressed her views by illustrating that “This event has benefited a lot in the character development apart from bringing the topic of inclusion to the vanguard.” On the other hand, Founder Special Olympics Pakistan Ronak Lakhani commended the Blue Band’s initiative by adding that “This event has opened doors for extreme awareness in the society and disseminating the goodness and a message of self-effacementi.e‘AchaiBarhnay Do.”

Race organized for differently-abled kids to encourage inclusion in playgrounds

Are Physicians Providing a Reliable Treatment For Nerve Pain?