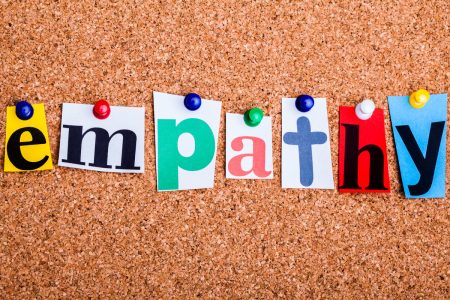 Empathy is worth practicing

31 golden rules that we often don’t pay attention to and forget how we maybe affecting someone else’s feelings:

1. Don’t call someone more than twice continuously. If they don’t pick up your call that mean they have something more important to attend to.

2. When someone drops something on the floor by mistake or drops food from the plate or doesn’t know how to use a knife/fork don’t stare at them. The same goes to people sneezing, coughing or even an uncontrollable fart. It’s an involuntary reaction.

3. Always skip using the washroom beside the occupied one. It makes it uneasy for the person in the occupied washroom as well as yourself if you occupy the one right next to theirs.

4. Return money that you have borrowed even before the other person remembers lending it to you. Be it 1 Rs or 100 Rs. It shows your integrity and character. Same goes with umbrellas, pens and lunch boxes.

5. Never order the expensive dish on the menu when someone is treating you for lunch/dinner. If possible ask them to order their choice of food for you.

6. Don’t ask awkward questions like ‘Oh so you aren’t married yet?’ Or ‘Don’t you have kids’ or ‘Why didn’t you buy a house?’ For god’s sake it isn’t your problem.

7. Always open the door for the person coming behind you. Doesn’t matter if it is a guy or a girl. You don’t grow small by treating someone well in public.

8. If you take a taxi with a friend, and he/she pays now, you pay next time.

10. Don’t call people on the phone very late if it’s not really important.

12. If you tease someone, and they don’t seem to enjoy it, stop it and never do it again.

13. Say “thank you” when someone is helping you.

15. f you’re talking to someone and notice any of the following, they’re trying to end the conversation: Their eyes keep darting away. They angle their body away from you. They give you rapid one-word answers.

16. There’s almost never a reason to comment on someone’s weight. Just say, “You look fantastic.” If they want to talk about losing weight, they will.

17. If you’re getting a long flight or train, shower before. The person next to you will appreciate it.

18. When someone shows you a photo on their phone, don’t swipe left or right. You never know what’s next.

19. If a colleague tells you they have a doctors appointment, don’t ask what it’s for, just say hope you’re ok. If they want to talk about it they will and you don’t put them in the uncomfortable position of having to tell you their personal illness.

20. Treat the cleaner with the same respect as the CEO. Nobody is impressed at how rudely you can treat someone below you but people will notice if you treat them with respect.

21. If a person is speaking directly to you, staring at your phone is rude.

22. Never give advice until you’re asked

23. Do not make plans in front of those you are not involving.

24. Don’t talk to someone if they are wearing headphones.

25. When meeting someone after a long time, unless they want to talk about it, don’t ask them their age and salary.

26. When a friend/colleague offers you some food, you can politely say No. But, don’t do this after tasting or smelling it. It’s an insult to the one who has offered it to you

27. When someone starts talking about their ailments, don’t start talking about yours. Neither say that how lucky you are not to suffer.

28. When someone you know has an obvious change in appearance, e.g., weight gain/loss, bald spot, acne. Never comment on it until they talk about it to you, they already know what is happened to them.

30. Mind your own business unless anything involves you directly — just stay out of it.

31. Do not view every post on Facebook as an opportunity to argue/debate, even if does not conform to your views or beliefs.

Got something to say? Share with us below in the comments section.

Also read: Signs That Your Vitamin D Levels Are Low