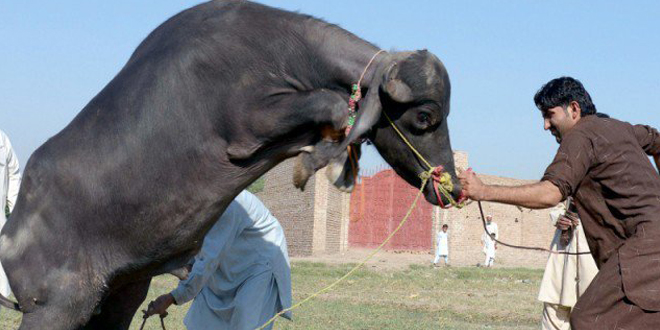 Why ‘Bari’ Eid is more fun than ‘Choti’ Eid

The 12th month of the Islamic calendar, Zilhajj, marks the end of the year for Muslims with two events of magnanimous significance: pilgrimage to Makkah and Eidul Azha that follows right after hajj. Muslims who are unable to go for pilgrimage stay at home, fast on the day of hajj and celebrate “bari” (big) Eid on 11th Zilhajj.

Another holiday Muslims celebrate is Eidul Fitr, falling right after Ramazan, the month of fasting. It is said to be a gift from God to all Muslims and it is called “choti” (smaller) Eid.

Eidul Azha is enjoyed more world wide than Eidul Fitr. This mostly revolves around Sunnat-e-Ibrahimi associated with sacrificial animals. South Asia’s biggest animal market ‘bakra mandi’ is set up in the metropolis city Karachi. Animals from all over Pakistan are transported to the mandi a month before eid for people to buy and sacrifice. This is when the fun begins. These animals include male goats, sheep, cows, bulls and camels. Owners, who are mostly farmers, breed these animals in special settings specifically for sacrificial purposes and look forward to extra income by selling them.

Humongous cows and bulls take over cities around Pakistan. They are decorated with special jewelry, such as headbands and anklets. They are also given names suiting their size like ‘tsunami’ and ‘kali aandhi’ and some are even inspired by Bollywood movies like ‘dabangg’ ‘gabbar’ or ‘raja’. Some owners decorate their animals with henna tattoos.

These beautiful creatures are witnessed from people all over Karachi and other cities.

People get their sacrificial animal a week before Eid and develop attachment to their animal. Special feeds are bought from small stores set up in tents all over the city and they are fed on a regular basis and looked after.

Most of the time young guys and animal lovers living in the same vicinity come together to set up tents and sheds for these animals with water troughs and huge baskets for the animals to feed. Maximum efforts are made in giving the animals an environment where they feel comfortable, a homely feel.

Animals are transported from the mandi to homes in a Suzuki, and once the animal is fed and settled, people take them for walks. People enjoy this as flocks of sheep, cows and bulls pass by streets with their chiming jewelry. Adults and kids together take part in taking care of these animals and taking them for a walk. It is a sight to see as you don’t often see so many animals together in urban cities.

Sometimes certain unfortunate incidents occur, like animals getting out of hand and hitting people or breaking the leash and running away. This mostly happens due to over-excited people who tend to annoy the already scared animal as it is adapting to the new setting.

As the day of Eid-ul-Azha gets nearer, people spend more time with their animals and the crowd at the mandi also increases. They spend all night with their animals, settling for chai, biscuits and snacks next to the tents, spending time and having fun with their neighbors and the animals.

On the day of Eid, Muslims dress up and sacrifice their animals that they have been treating like guests for the past few weeks with the best of intentions and look forward to doing the same next year. Prayers are offered and specialized butchers come over after prayers to slaughter the animal in the name of God. No part of the animal can be sold. Skin is given to the needy and some of the meat is donated, sent to relatives houses and while some meat is kept for personal use. The day of Eid is usually spent distributing and receiving the meat.

Later during the day and the two subsequent days, people use the meat for barbecues, mutton pulao, hunter beef, chops and cooking other delicious food items. Cakes and sweets are also given to relatives and children. These parties are enjoyed by both adults and children alike, and alongside the sacrificial animal-related fun, women go shopping as designers bring new Eid collections.

All this excitement is absent in Choti Eid, which is why I find Bari Eid better and more fun.

Here Is How You Can Make Seviyan Fudge

Eid Looks That Can Help You Design Your Summer Wardrobe

5 Types of People You Will Find At Every BBQ Party

Looks That Will Steal The Limelight From The Bakra This Eid