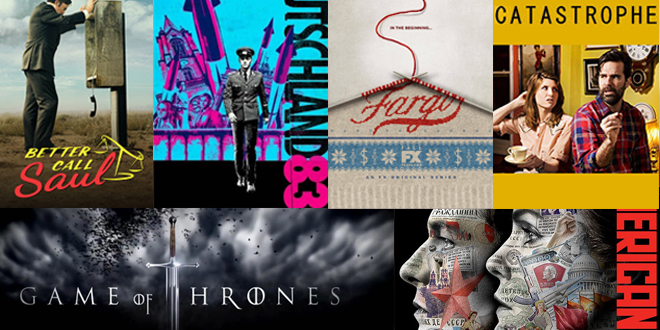 2015 had been a massive year when it comes to people who love to be entertained by TV shows. With new shows starting as well as anticipations for the existing ones, this year had got the best of people to stick to their home and stay up-to-date with every episode. Despite the wide range of choices that could have made it to the top 10 of 2015, I chose the ones that are not only to my preference of being top 10, but have a good strong backing for making it on the list. Fargo is an American black comedy–crime drama anthology television series created and primarily written by Noah Hawley. The show is inspired by the 1996 film of the same name written and directed by the Coen brothers, who serve as executive producers on the series. “The Americans” is an American television period drama series created and produced by former CIA officer Joe Weisberg.  The Americans is the story of two Soviet intelligence agents pose as a married couple to spy on the American government.

Catastrophe is a British sitcom, created and written by Rob Delaney and Sharon Horgan. Directed by Ben Taylor. Catastrophe is the story of an Irish teacher and a Boston ad exec start a relationship after their lust leads to pregnancy. Deutschland 83 is an eight-episode German television series starring Jonas Nay as a 24-year-old native of East Germany who in 1983 is sent to the West as an undercover spy for the Stasi. Created by Anna Winger and Joerg Winger, written by Anna Winger and directed by Edward Berger and Samira Radsi. The Knick is an American television drama series on Cinemax created by Jack Amiel and Michael Begler, directed by Steven Soderbergh and starring Clive Owen. The series chronicles the professional and personal lives of Dr. John W. Thackery (played by Owen) and the staff at a fictionalized version of the Knickerbocker Hospital (“the Knick”) in New York during the early part of the twentieth century. Game of Thrones is an American fantasy drama television series created by David Benioff and D. B. Weiss. It is an adaptation of A Song of Ice and Fire by George R. R. Martin.

Master of None: Season 1 Personal and professional life of a 30-year-old actor in New York who has trouble making decisions.  Master of None is an American comedy television series, created by Aziz Ansari and Alan Yang. A blind lawyer, with his other senses superhumanly enhanced, fights crime as a costumed superhero.  Marvel’s Daredevil, or simply Daredevil, is an American web television series created for Netflix by Drew Goddard, based on the Marvel Comics character of the same name. Created by Drew Goddard. A young programmer who suffers from an antisocial disorder connects with people by hacking them.  Mr. Robot is an American drama–thriller television series created by Sam Esmail. It stars Rami Malek as Elliot Alderson.