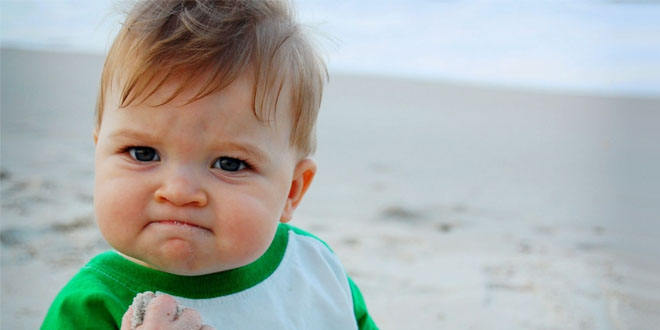 Success Kid meme is a success story for his dad

You may have come across a picture of a toddler with a fist full of sand. It has become one of the most popular memes of all time and is used by anyone who needs a motivational fist. It makes most of us ‘LOL’ at the picture in the various ways it has been used, be it for passing exams or even being happy about winning over a girl/guy.

You might know this toddler baby in the meme picture as ‘Success Kid.’ This meme is actually more than just a picture that went viral. As we know, most memes are based on real people, and these real people can have real issues in their lives too.

In real life, his name is Sammy Griner, who is now 8-years-old and lives in Jacksonville, America. Over the past several years, you must have come across this image at some point in your life. But, this young one and his family didn’t know that it would end up becoming a rescue call for Sammy’s father’s life.

His mother, Laney Griner, was not too happy about her son’s picture going so viral at first. She explains, “It was just a lucky shot of Sammy. We go to the beach and I put him in the sand and he crawls around and he grabs a fist full of sand and he goes to put it up near his mouth and I just snap that shot – that’s all that happened,” she explained.

Laney took the famous image on Ponte Vedras Beach in 2007 when her son was just 11-months old. She posted the photograph on Flickr, a photo sharing website, and within a span of a year, it went colossal on Myspace. Presently, it’s everywhere throughout the internet, and still drifting on different social media platforms like Facebook, Twitter and Instagram. It’s turned into a standout amongst the most renowned and popular memes ever.

This little one – who is not so little anymore – has become his father’s savior in real life.

His father, Justin Griner, had been experiencing kidney failure for several years. He said that it ran in the family and he’d been on dialysis since 2009.

His specialists let him know how he required a kidney transplant and that they put him on the list for a donation. While a significant part of the real surgery was paid for by health insurance, his family knew they’d have enormous expenses coming their way for anti-rejection medicine and other different costs to the aftermath of the surgery. It was cash they required forthright, but sadly didn’t have. The family said they wouldn’t have the capacity to be on the transplant list without justifying they had the funds they needed for the surgery.

Thus, in April 2015, Justin and Laney decided to seek help from the worldwide cyber portal and started a GoFundMe.com page to help raise money. Laney had set it up, telling a few sites that were big ‘Success Kid’ fans and they were raising funds to help Sammy’s father. They were hoping they could help promote it. “We weren’t generally expecting a ton of a reaction,” Justin said.

But the Success Kid had a huge reaction.

“The story kind of went viral in itself,” said Justin. “And in a week, we wildly surpassed our fundraising goals. It was literally about 48 hours and that fast to be able to reach our goal and be even lucky enough to have some more.”

Fans from across the globe helped raise the $75,000 goal and then some. They eventually ended up raising a grand total of more than $100,000.

The response from the world came out to be overwhelming and helped Justin get his transplant by August. After a healthy recovery, he is grateful to all the people that came out to help and especially his son Sammy who made it all happen in the first place. Justin’s doctor says he will be better in no time and the procedure was a successful one. Sammy, who will turn 9-years-old in September, is ecstatic about being his dad’s superman and being a part of his dad’s success story in reality.