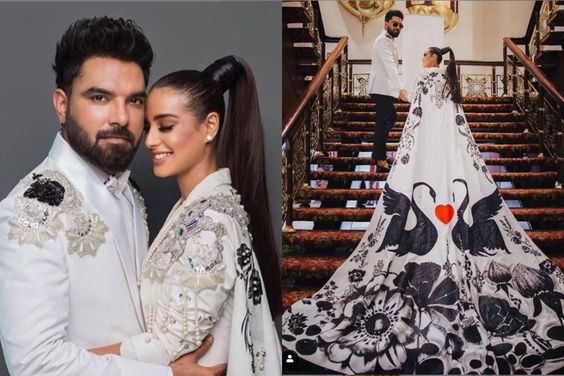 Unless you have been living under a rock, you would know that actor Yasir Hussain proposed to Iqra Aziz at the Lux Style Awards 2019 on Sunday night, July 7th. Yasir got on his knees and asked his lady love to marry him in a hall filled with over 100 people, clapping and hooting for Iqra to say yes.

The yes followed with Yasir’s public display of affection as he planted kisses on Iqra’s cheeks. While some applauded the couple, this PDA gave way to a heated debate over the internet. Many termed it to be cringeworthy and an uncomfortable watch.

But what is it about PDA that makes people uncomfortable?

According to Psychologist Yumna Usmani, the thing about PDA is that it is two sides of a coin: either heartwarming or downright repulsive for the people.

But why do Pakistanis specifically find PDAs more repulsive than heartwarming? “First and foremost, they perceive it as a threat to societal standards – being accepting of it will allow it to spread and become a norm,” says Usmani.

Secondly, she explains that public displays of affection just happen and people become an unwilling audience. “This feeling of being forced and unwillingness is unsettling,” she says.

For some, it may also show up as a result of longing for something they may be lacking in their own lives, mentions Nida Aslam Roshan, a humanistic and integrative therapist.

“Not having a lover, or a loving partner, or holding one’s self back from finding love out of certain fears, may also give rise to dismissing, suppressing and rejecting the feeling and expression of love,” she adds.

Why do couples indulge in PDA?

While there is a lot one can say about others’ deep-rooted issues with witnessing PDA, what does PDA say about couples, such as Iqra and Yasir, indulging in it?

According to a 2013 Ohio State University study, couples into PDA have more chances of lasting longer. Usmani mentions that the couple who engage in PDA might just have an affectionate style, may want to exude confidence and strength of their relationship.

However, Aslam believes PDA may not always translate to a couple having a successful relationship. “Individuals experiencing feelings of insecurity in their relationship also at times feel the need for PDA,” she says.

Pakistanis and the backlash on PDA

Iqra and Yasir’s PDA also exposed an important aspect of our society. A significant number of people on Twitter mentioned that Pakistanis are OK with witnessing violence on screen and in real life but cringe at the sight of love or affection.

While people may be quick to rule out the Pakistani society to be a problem, Aslam explains that acceptance towards violence isn’t limited to a country or region. “Human evolution has always had certain sacrifices at its core. Wars, violence and chaos remained at the core of each civilization, until human beings became somewhat immune to it,” she says.

On the other hand, Aslam says that based on the phenomenon of negative bias, our minds are hardwired to indulge and be more receptive of negatives than positives.

Related: Are You In Love? 13 Signs That Say Yes

In Pakistan, or perhaps the world over, people preach the motto to ‘live and let live’ but it is rarely practiced.

Iqra and Yasir raised many eyebrows with their PDA but we wish them the very best for their life ahead.

What do you think about PDA? Let us know in the comments below.