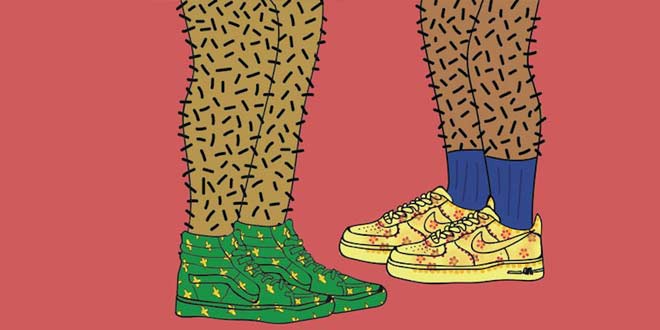 Look into one of Ayqa Khan’s electric works of art and instantly you’ll first notice, without a doubt, is the display of body hair such as the legs, arms and buttons, of her dazzling characters.

The ladies she draws, are of conventional South Asian themes of young American society that are not concealing their stubble. They sit, stand and stoop in great poise that do anything besides covering their hair, as they smoke casually. As a general rule, her female subjects are seen legs and arms outstretched, faces quiet, cool and gathered in the midst of a background of soaked purples, greens and oranges.

She’s a self-trained digital artist and picture taker who has a first-generation conceptualized mindset “and makes assemblages of work revolved around topics and stories of the original South Asian group.”

“My intentions are to normalize [body hair],” she explained to sources online “because it is something that shouldn’t be a huge deal considering body hair is natural and the removal of it is a social construct.” The young, New York-based photographer and digital illustrator is just as direct when she speaks of her desire to counter the stereotypical images of South Asian women in mainstream media.

Her work is a clear depiction of her own personal experiences and feelings. She explains, “I would often receive negative comments from friends and family members who tried to instill this idea that body hair is ‘unnatural to show’ and ‘unfeminine-like’. When this happened, it enforced the idea of how the removal of body hair is just a conditioning act done by society. I began to turn inward and dealt with this frustration creatively.”

She puts up her work on her Tumblr page and has done a series of illustrations on women’s body hair.

She further went on saying, “south Asian woman do not get enough representation in most spaces and I feel the need to express this in an organic way.” Her work of art is deliberately done the way it is, revealing on the more natural side of any woman without any artifice. “I am actively drawing body hair. My intentions are to normalize it … because it is something that shouldn’t be a huge deal considering body hair is natural and the removal of it is a social construct, yet the judgment and pain that comes with having body hair is one that is harmful and needs to be stopped.”

The young artist is influenced by the South Asian culture, particularly when it comes to clothing and cinema. Along with this, she is also inclined to the culture of youngsters in America that has been transforming for years.

Her motivation is derived from her sensitivity of being a young adult who has such hair-shaming experiences that made her feelings stronger. Her inspirations are Mohammad Fayaz, whose work has always done an outstanding job to encourage her. She also enjoys artists such as Hassan Hajjaj, Shirin Neshat, Hossein Fatemi and Shadi Ghadirian.

Way to go on being natural girl!

Keep your hair from turning grey without hair dye

10 ways you are damaging your hair