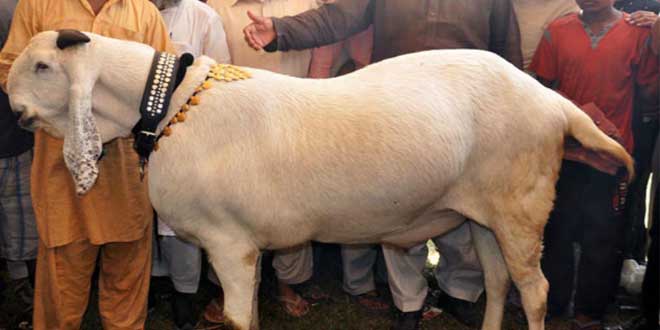 My first trip to the bakra mandi

A few days ago, for the very first time in my life, I went to a cattle market (bakra mandi). I didn’t go there to buy a bakra; it was a work-related trip but nonetheless, I was pretty excited as I had no idea what I would be in for.

I’m generally fond of animals and bakras are no exception. Every Eidul Azha, when we would get our bakras, I would be sure to take them out for a walk as we didn’t have a dog. I loved spending time with the animals and I always wondered how the experience would be of going into the dirt and gore and finding the perfect sacrificial animal from the mandi.

Therefore, when the day for our visit arrived, I was ecstatic. I had no idea how the rest of the day would turnout. From the very beginning, the trip was a disaster.

When I, along with my colleague, reached the bakra mandi at around 4pm, the first thing that hit me was the smell. Why did it smell so bad?

“What’s wrong with these animals?” I thought, “Whatever happened to hygiene and cleanliness?”

After overcoming the initial shock on the horrid smell, I mustered up the courage to move along and take myself right in the midst of the mandi.

“How bad could it be?” I thought to myself.

Nothing could have prepared me for what was in store.

There were bakras of all shapes and sizes, all eating and rolling around in their own filth. If any bakra got out of line or was making too much noise, they would be beaten by their caretakers. Every seller claimed that they had the biggest and best bakras available – even though their stock was no different from the rest.

All the sacrificial animals were insanely expensive. And one would think that if they were asking for so much, they would probably be keeping the animal in a better place and investing more on its well being. But that wasn’t the case.

The environment they were kept in was far from hygienic; they defecated at the same place where they slept and ate, and the sight of it just made my stomach lurch. While living in Pakistan, you get used to dwelling with filth. Better living conditions for animals are a far cry in a place where even humans aren’t provided with this necessity. But that cannot be used as an excuse every time.

Another thing I noticed was how scared some of the animals were – especially cows – of people coming close to them. It’s no secret that the caretakers and sellers beat these animals but to hit them to such an extent that they become terrified of human contact is simply unacceptable.

Is there no one who can regulate these owners and their behavior with the cattle? I guess not.

A man was sharpening his knife in front of an animal that was to be sacrificed; seeing this, our Holy Prophet (PBUH) said.

“Do you want to make it die twice? Why didn’t you sharpen your knife [away from the animal’s view] before immobilizing it?”

This shows that our Holy Prophet (PBUH) didn’t want the sacrificial animal to even see the knife that was being sharpened, as it would cause the animal distress. The Prophet (PBUH) wanted the animal to be respected, to be spared suffering and given the food it needs and to be well treated. These things were non-negotiable.

Surely, as Muslims, we should raise our voices whenever we see injustice being done to any living being, especially an animal – because where humans can voice their pain, animals cannot. We should give the sacrificial animals more respect and take care of them properly. We should take our Prophet’s (PBUH) example – an animal deserves as much regard as a human being. My trip to the mandi taught me a lot of things, but it also made me think in retrospect about what our duties towards them entail, and so far, we haven’t done nearly enough for them.