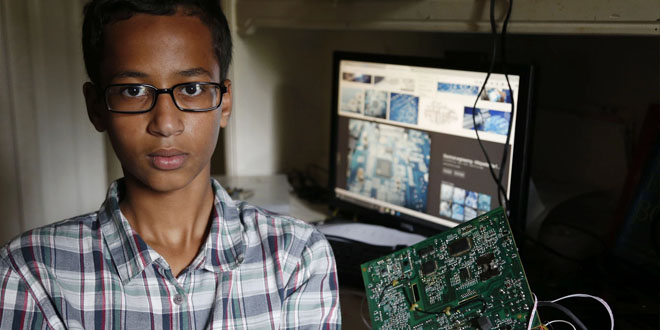 A 14-year old kid ended up being a source of much social media frenzy after he made a home clock and brought it to school to show his teachers and friends.

Now, many might find this story very plain and meager, but if we add the bit about how his teacher thought the clock was a bomb and how she thought so because the kid was a Muslim, then it would bring the social media uproar over it in much context.

The police of Texas arrested 14-year-old Ahmed Mohamed for building a clock. Take a minute and let the ridiculousness of this statement seep in. Ahmed, who lives in Irving, and has a particular fascination in mechanical technology and engineering, set up the homemade gadget together on Sunday night. When he took it to class the following day, he was hauled out of class, to be handed over to cops, and taken in cuffs to juvenile detention, with the allegations that his creation resembled a bomb, according to his teacher.

There are rambling businesses and self-broadcasted vocations of “terrorism specialists” in the US that benefit enormously by purposely overstating the danger of terrorism and keeping Americans in a condition of degraded apprehension of “radical Islam”. There are a wide range of activists who construct their open stages by vilifying Muslims and laugh at worries of people who think phobia over Islam is overrated. The fact Donald Trump – the US presidential candidate from the Republican Party – believes this to be true is a huge testimony to it.

Islamophobia in Americans is real, and Ahmed was a recent victim of that.

Ahmed made a simple device. He made the clock by wiring a circuit board and a power supply to a digital display. He strapped it inside a case with a tiger hologram on the front.  He enthusiastically took it to his engineering teacher, who commended him but immediately advised him not to show any other staff members.

I find this appalling as to why this kid, who showed a keen interest in making these gadgets and ambitions into engineering, was de-motivated not to show one of his creations.

He did like he was told and kept it in his bag during his English class, but his teacher heard it beep. She confiscated it when he showed her his home-made clock at the end of class. Later in the day, the police, accompanied by the school principle, came to his sixth period class to arrest and march him out of school. Interrogated by five officers, he was asked why “he was trying to make a bomb.”

This absurd news made Ahmed’s father, Mohamed Elhassan Mohamed, disappointed because his young son had to be a victim of prejudice. He says,

“Because his name is Mohamed and because of September 11th, my son was mistreated.”

The news went haywire on social media, as all the world’s Muslims united to question to when this extremist reaction would stop. It ended up capturing the attention of the CEO of Facebook Mark Zuckerberg, who consoled on the matter. It also had a huge impact, when the President of United States of America, Barack Obama himself tweeted about Ahmed’s clock and invited him to The White House.

Cool clock, Ahmed. Want to bring it to the White House? We should inspire more kids like you to like science. It's what makes America great.

Google wasn’t far behind either.

Hey Ahmed- we're saving a seat for you at this weekend's Google Science Fair…want to come? Bring your clock! #IStandwithAhmed

Hillary Clinton also recognized the gravity of the situation.

And others also took to social media to express their rage over the incident, and many showed their criticism the only they way they know how, by sarcasm and wit.

Just read about this.. Way to kill the spirit in a smart ambitious kid 💔 #IStandWithAhmed

Fear a deadly/dehumanizing self-inflicted disease.Neo-cons it inflicted on US post 9/11.In pain,outrage,& violated I write #IStandWithAhmed

I like that the popular support hashtag is #IStandWithAhmed, not #IAmAhmed. Not all of us can selfishly claim the black Muslim experience.

Brits appear to have developed some sort of Giant Bomb, possibly attached to rocket. #IStandWithAhmed via @rupagulab pic.twitter.com/1F4MfOp19q

Ahmed’s charges were dropped as a result of the outrage, because who could blame a kid for being Muslim and having an interest to build things? Isn’t that what kids are meant to do? So why this charge on a 14-year-old boy? Because he was Muslim? If this isn’t a wakeup call to end racism that is going on forever against every other Muslim person, be it as equal of a citizen of America like any other, then I don’t know what is.