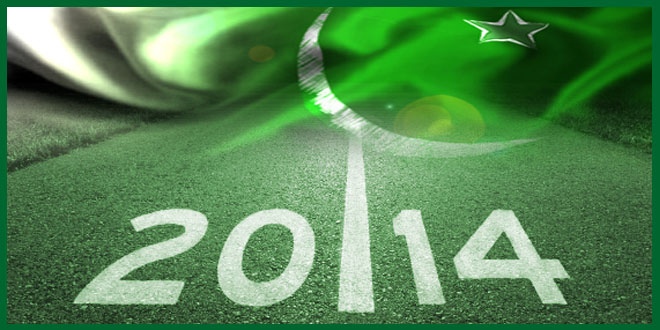 Promising Pakistan: Looking Back at 2014

Pakistan is a standout amongst the most imperative nations of the world, staying in the top news features since 1947. From its conception, Pakistan has confronted innumerous good and bad times along with many setbacks, yet always finding a way to haul itself out.

Though some might argue that the year 2014 was deplorable and tragic, Pakistan accomplished a ton during that time, proving to be an emerging and brave country. Let’s take a look at some of the best things to happen for Pakistan in 2014.

In the wake of confronting endless postpones in the previous years, the Ministry of IT and PTA (Pakistan Telecommunication Authority) at last took a bold step and brought about an effective closeout of 3G and 4G system licenses in the country.

2014 was an extraordinary year for new businesses. Various new businesses, most noticeably the alumni of Plan9 incubator and PlanX accelerator, received financing from global financial specialists and funding firms. This has increased the number of investments the country has received.

Pakistani nationals have repeatedly demonstrated their willingness to prosper. The most recent expansion to the accomplishments picked up by such people and organizations were regarded at the recently held APICTA 2014 occasion in Jakarta, where new Pakistani businesses seeking distinctive classes won 2 Gold and 3 Silver awards. In the best startup classification, RemoteInterview.io won the runner-up honor; EatOye won a runner-up award too in Tourism and Hospitality class. In the Tertiary Student Project classification, SmartSteth and TRex Tremor Reader brought home both the Winner and Runner-up honors. At last, in Media & Entertainment Technologies, Groopic asserted the Gold honor for their item “Ingrain.”

Tossing down their hands in irritation, people in general without precedent for history, stood firm behind the military and the sensitivities for activists’ as the nation geared up for “Zarb-e-Azb.” It became increasingly clear to the general public that these so called “religious fighters” rotate around their own particular prosperity rather than protecting the interests of religion or the country itself. Only for uncovering this, the Pakistan Army certainly merits a congratulatory gesture.

The nation obtained worldwide distinguishment in its cause for educating the population, both male and female. This was witnessed when the city of Oslo saw Mala Yusufzai lift the Nobel Prize amongst many renowned names. Not only this, Malala also secured the Liberty Medal and World’s Children Award. Alongside, NGOs like Alif Ailaan kept motivating the nation to do more in future.

Sports is one of the most unpredictable sectors of the Nation. Pakistan is filled with immense talent that needs a platform to present themselves as a valuable asset for the country. In 2014, with so much going on in the Country, let’s have a look at some of the achievements:

Pakistan packed away silver awards in both Champions trophy and Asian diversions in hockey defeating the Indian team in India. Muhammad Waseem exceeded expectations in boxing.

The nation at last whitewashed Australia in Test cricket after 32 years. Misbah Ul Haq, the skipper, managed to score the fastest test match century setting new records. Also he was entitled as the highest run scorer of the year.

Moreover, the green shirts also defeated Sri Lanka, Bangladesh and the arch rivals, India, during the Asia Cup to win the title. The gift was a big one. The exceptional knock by Shahid Khan Afridi against India was a treat to witness, the 2 consecutive sixes by Lala were enough to spread smiles and joy throughout the country.

Samina Baig, a Pakistani mountain climber, manages to hit the top most peaks of all the 7 continents including the mighty Mount Everest.

Apart from all these achievements Pakistan was also digging its name in several others sports activities like Kabaddi, Tennis and Snooker.

When discussing the entertainment industry of Pakistan, the exceptional and extremely talented Sharmeen Obaid Chinoy won the first ever Emmy Award for Pakistan. Burqa Avengers, another Pakistani production, managed to get nominated for the Emmy awards.

After working hard for several years and spreading happiness and laughter all over Pakistan by his amazing sense of humor, the Pakistani comedian, Saad Haroon was entitled as the 2nd most funniest man in the world by the “Laugh Factory”

This was not the end, Pakistani animator Mir Zafar Ali won his first ever Oscar Award for applying breathtaking animation skills in the top animated movie “Frozen.”

Apart from all the awards and titles we have achieved, there is another big achievement that cannot be ignored. Music and Dramas have never ceased but the reappearance of the general population to films and cinema, which has been picking up quality for a few years now, just saw an increase in the last year. Once again, slowly and gradually Pakistan is moving back towards the path to success and prosperity.

16th December 2014 was the most depressing and heartbreaking point Pakistan has ever seen in its history. The point where the entire Nation’s understanding and patience were tested. It seemed as if the damage was done and had reached the roots of the country. There has been no point lower than this, the only choice left for Pakistan was to ascend and barge back to where it was once, as a strong, fearless and united country and gain back its lost greatness which Pakistan did very well yet again