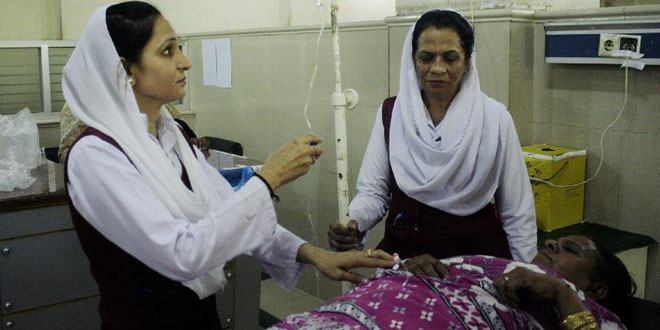 Nursing students and nursing associations are planning to stage demonstrations throughout Sindh province to voice their anger over inordinate delay in conducting annual examination of nursing institutions’ students.

Accusing senior officials of Sindh health department of interfering in the affairs of Sindh Nursing Examination Board, sources said that although the annual examinations of Nursing exams institutions’ students were scheduled to be held in September 2015, `poor planning’ and `negligence’ on the part of provincial health department has delayed the examinations by three months, creating uncertainties among the examinees.

“Isn’t it an irony that annual nursing examinations have already been conducted in Punjab, Baluchistan and Khyber Pakhtunkhwa in September, whereas Sindh Nursing exams Board has failed to conduct the examinations despite a passage of three months,” remarked Syed Shahid Hussain, focal person of Provincial Nurses Association (PNA).

He said that inordinate delay in conducting the examination has created uncertainty among the candidates merely because of `ill-planning’ and `uncalled for’ interference being made in the affairs of Sindh Nursing Examinations Board by senior officials of provincial health department.

When contacted, Sindh Secretary Health Dr Saeed Ahmed Mangnejo said that all arrangements to conduct nursing exams have been finalized.