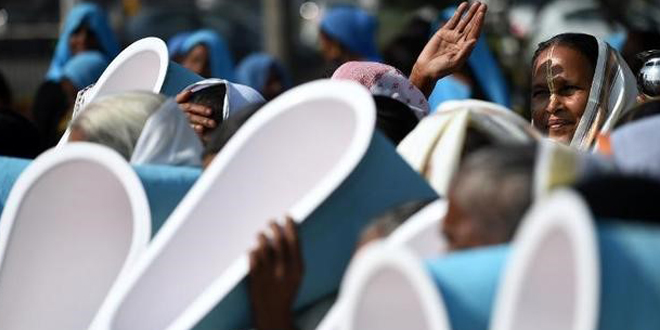 India pays citizens to use toilets to fight open-defecation

Nearly 600 million people in India defecate in the open – this has forced the government of India pays citizens to use toilets for public.

Open defecation has turned into a catastrophe for neighboring country, India. Even in the presence of public toilets, people prefer to use bushes, open fields and water bodies to relieve themselves.

Due to this, the Indian city of Ahmedabad has come up with a solution: pay children to use public toilets.

Until now, people in many slums of Ahmedabad have been using railway tracks as defecating areas. The department of Sanitation Development India reported that it had installed public toilets throughout the region, but citizens are not aware of these facilities.

The routine act is a serious risk for the health of the public. According to the State Health Department, India, more than 100,000 children die every year, only from viruses transmitted through human waste. Similarly, over 200,000 die due to diarrhea.

As per health specialists, human waste acts as a feed for flies which later come into contact with humans and food items. They can also contaminate drinking water. The bacteria in the waste itself act as a source of diseases.

Through this scheme, the Municipal Council of Ahmedabad has tried to motivate citizens to avoid open defecation – it has been focused on children because once children start using toilets, they would act as a motivation for people of other ages.

Similarly, the Nadia district in India has come up with another method. People who are found defecating in the open would be taken into custody and their photos with names would be shown on “walls of shame”, NDTV informed.

The administration has already come up with methods of monitoring the districts and committees are being formed.

Narendra Modi, Prime Minister of India, wishes to see India able to use toilets by the end of 2019, as announced in one campaign.

Indian toddler dies after getting head stuck in lift